One Musa Bah, a businessman and a resident of Old Yundum, recently testified in the trial of one Alagie Dumbuya, accused of stealing before Magistrate Sidi Jobarteh of the Brikama Magistrates’ Court.

In his testimony, Bah told the court he recognised the accused person and could recall what happened on 17 November 2014.

He said on the day in question, he was sleeping at around 2 a.m. when the accused came and entered into his house and collected his bag, went with it outside and removed D200, and later returned the bag.

According to him, he thought it was his watchman and when he called the watchman, the accused ran away, adding that it was the time he realized it was a thief.

He ran after him but could not catch him and he called the landlord, adding that the accused left his teargas on the veranda.

He went with the police to the accused’s compound where the accused was arrested and taken to Old Yundum Police Station.

At the police station, he added, the accused confessed to stealing the items, adding that they went with the accused to his compound where he entered into his mother’s house and brought out the items stolen, and D175, from the D200 he stole.

The recovered items were tendered and marked as exhibits. 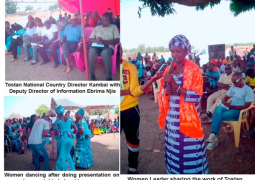