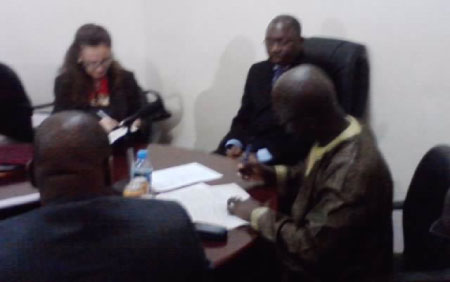 The Africa Development Bank (ADB) yesterday signed a grant agreement for USD$3.2 million (equivalent to D90.7 million) with the government.

The agreement was signed by its resident representative for the West Africa Region at the Ministry of Finance in , to support activities for improved economic and financial governance.

Speaking at the signing ceremony, Leila Mokaddem, ADB’s regional resident representative based in Dakar said: “This is a three-year project, aimed to support the government with the implementation of its public financial management reform strategy, with the overarching goal of establishing the efficient, effective and accountable use of public resources as a basis for a stable macroeconomic environment, socio-economic development and improved welfare of Gambians.”

More specifically, Mokaddem emphasized that the project focuses on enhancing macroeconomic policy analysis and debt management, as well as strengthening transparency and accountability in public management, adding that the direct beneficiaries of the project will be the Finance and Economic Affairs ministry, the National Audit Office and the Finance and Public Accounts Committee of the National Assembly.

Madam Makaddem, who was on her three-day visit to the country, also revealed the ADB has supported The Gambia with its policy and institutional reforms since the 1980s.

“The Bank Group recognizes the firm commitment and the progress achieved by the government in advancing reforms in public financial management.

According to the ADB representative, “in recent years (under ADF-11), the Bank has provided over USD$ 8.5 million, in the form of general and institutional support to strengthening economic and financial governance. She further explained that “the Bank group commenced its lending operations in The Gambia in 1974 and has approved 63 operations amounting to USD$ 335.5 million for the benefit of The Gambia.”

This support, she went on, has contributed to improved budget planning and management with increased allocations to pro-poor spending in sectors such as heath, education and agriculture, as well as improved revenue collection.

She finally reiterated the ADB’s appreciation for what she called “excellent relations”, further assuring the continuing support of the Bank Group to the programs pursued by the government aiming at making The Gambia a prosperous and equitable nation.

Speaking earlier on, Mambury Njie, Minister of Finance, said the event marks yet another manifestation of the support to The Gambia provided by the ADB.

“As the premier regional development financial institution, the ADB has been very supportive to The Gambia since the start of its operations in the 1970s.” said the Finance Minster.

He told the gathering that the aim of the project is to address the human and institutional capacity constraints and weaknesses in public financial management that will help in the establishment of efficient, effective and accountable use of public resources as a basis for a stable macroeconomic environment and improved well-being of Gambians.

The permanent secretary at Finance, Mod Secka, expressed appreciation of the relations between the government and ADB, and their good cooperation in preparing this project.

According to him, this project was approved two weeks ago, adding that it was one of the fastest agreements signed in the country.

STATEMENT BY H.E. SHEIKH PROFESSOR ALHAJI DR. YAHYA A J J JAMMEH BABILA MANSA - PRESIDENT OF THE REPUBLIC OF THE GAMBIA ON THE OCCASION OF THE GENERAL DEBATE OF THE 69th SESSION OF THE UNITED NATIONS GENERAL ASSEMBLY

Peace Corps committed to improving lives in The Gambia