The British High Commission and local dignitaries on Sunday (11th November) marked Remembrance Day in The Gambia with a ceremony at the Commonwealth War Graves in Fajara.

At the ceremony, the UK High Commissioner to The Gambia David Morley delivered a speech and a two minutes silence was observed at 11am.

The High Commissioner laid a ceremonial wreath of poppies at the ceremony on her behalf of Her Majesty Queen Elizabeth, with wreaths also laid by the Gambian chief of defence staffLt Gen. Ousman Bargie and the Inspector General of Police.

More than 250 people attended the ceremony including Gambian veterans who fought in World War II, as well as senior members of the diplomatic corps and a small contingent of the UK Royal Gibraltar Regiment.

Prayers were offered for those who lost their lives fighting in conflicts by Bishop Hannah Heim, the Bishop of Banjul, as well as by the Imam Ratib of Banjul.

11 November also known as Armistice Day was the day when World War I ended, 94 years ago, and the day is recognised across the world as a chance to honour the war dead.

Gambian forces fought alongside the British in both the first and second World Wars, and today the Fajara War Cemetery contains the bodies of 203 graves from the second World War, made up of 122 West Africans, 63 British, 2 Australians, 2 French, 2 New Zealanders, 1 Zimbabwean and one Norwegian.

Speaking on behalf of Her Majesty the Queen, High Commissioner David Morley said at the ceremony: ‘We have come here together today in the presence of Almighty God to remember with gratitude the courage and devotion of the forces of the Commonwealth and all others who gave their lives in the wars’.

‘They shall not grow old, as we that are left grow old. Age shall not weary them nor the years condemn them; At the going down of the sun, and in the morning, We will remember them.’ 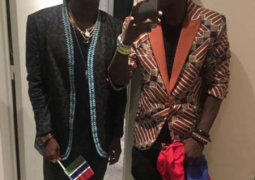