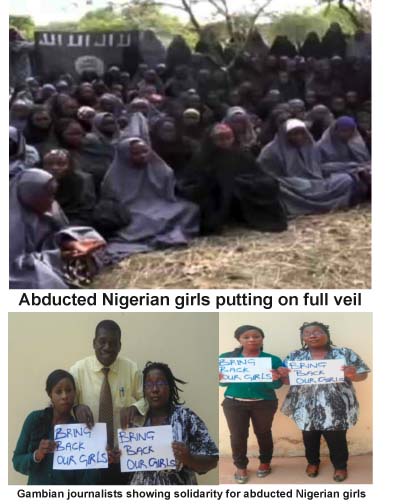 Hello and welcome to another edition of She-She-She, your weekly edition that deals with issues of women and girls within the country and beyond.

In our today’s edition we join the rest of the world in showing solidarity with the abducted girls in Nigeria.

It is very sad that the world we live in today is no longer safe for women, girls and children. These innocent girls are doing everything possible to be educated and become better people in our society.

It is a dream for them and for that dream to be shattered by terrorists who are after their own selfish interest and hiding their face behind our noble religion, Islam, is a call for concern to all.

I can only imagine the terror these girls are going through in the hands of Boko Haram. My religion, Islam, is a religion of peace, a religion that frees women and girls from the harsh treatment of the pre-Islamic era.

Islam does not ask us to do jihad by kidnapping and abducting girls. It is only terrorists that kill, kidnap or abduct girls, commit suicide and make the world a living hell.

Over 234 girls have been abducted, 100 more are victims of rape and thousands are dying of hunger each day around the world. Sometimes I wonder if being feminine is a crime against humanity.

When women and girls are tortured and abused each day around the world, little or nothing is done about it. Women and girls all over the world are used by terrorists to get what they want from their opponents.

Those who are to protect us being their mothers, sisters, aunts, nieces, daughters and wives are the very ones behind our torture.

Can someone remind the Boko Haram militants that they are in this world today because a woman gave birth to each and every one of them?

The women that gave birth to them never thought they would go against them someday. They wished them to be responsible men that would grow up and fight for the rights of women and girls; instead they have chosen to become terrorists, abducting, raping and killing women and girls.

The Boko Haram leader, Abubakar Shekau, has vowed to sell the girls despite the plea from their parents and the world in general.

But the question I want to ask is, are we going to fold our hands and watch the girls suffer in silence? Real men don’t buy or sell girls.

I can see the terror on the faces of the mothers of the abducted girls. The mothers are crying out to the world to bring back their girls to them safe and sound.

It has been weeks and by the looks on the faces of the mothers of the victims, one could tell that since their daughters were abducted they have not had enough sleep, food or even water to drink.

They are sick and the only cure to their illness is for the world to bring back their girls to them safely.

It is very painful for a mother to see her child in pain and could do little or nothing about it. The mothers of the victims are saying they are powerless and are asking the Boko Haram leader to please bring back their girls.

We want the world to tell us, what is wrong with educating women and girls?

All the terrorist groups are comprised of men but when it comes to getting what they want, they kidnap or abduct girls, rape women and girls, turn them into objects and use and dump them anyhow they like.

Time is running out: there is no room for talks; it is time for action because the abducted girls have the right to survive.

The Boko Haram leader in a video he released said and I quote: “It is now four years or five years that you have arrested our brethren and they are still in prison. You are doing many things to them and now you are talking about these girls. We will never release them until you release our brethren.”

What is the Nigerian Government waiting for? By now they should have reached the negotiating table to do everything possible to free our girls.

It is really sad that anytime Africa has a problem, they cannot solve it on their own but have to wait on world powers to join forces with them.

She-She-She is calling on African leaders, the UN, the EU, human right groups and in particular the Nigerian Government to go to the negotiating table with the militants and “Bring back our girls” safe and sound.