The match was attended by hundreds of spectators and both sides put on a brilliant display of skills and talent.

Brikama zonal team opened the scores in the 15thminute of the match through an own goal by Gunjur midfielder Ousman Touray, alias major, Gunjur fought but could not found the ball at the back of the net and the first half ended 1-0 in favour of Brikama zonal team.

In an interview with Pointsports, the head coach of Gunjur zonal team, Lamin Kaku Jabang, said despite his sides' loss to Brikama zonal team in a test match 2-1 and he is still optimistic his side will certainly perform to expectations in the zonal championship.

He stated that his boys are ready for glory this year and he called on Gunjurians to come forward and support the team so that they can win the trophy and he also hailed the fans for their support of the team during their test matches.

For his part, the head coach of Brikama zonal team, Lang kah Bojang said he was impressed with the performance his team put in and he revealed that Gunjur is not a problem to Brikama. He also revealed that two of his players are away with Armed Forces FC in African Military tournament organised by African Military sports and hosted by . 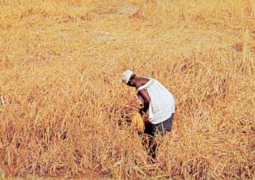