The president of Brikama Youth and Sports Committee (BYSC), Basiru Bajo, has expressed delight with Brikama United for snatching a victory against US Ouakam, which has earned them a place in the second round against Esperance of Tunisia.

Speaking to reporters after the team’s arrival from Senegal on Monday, Bajo said they would prepare very well for their clash with Esperance of Tunisia, a formidable side that won the CAF league title last year.

He applauded the players and coaching staff for making all football fans in West Coast Region and the country happy.

The Gambian league champions players and coaching staff received a warm welcome by football fans in Brikama and its satellite areas after they have kicked Senegalese league champions US Ouakam out of the CAF champion’s league at the weekend in Dakar, Senegal.

Brikama United beat Senegalese league champions US Ouakam 3-1 on post-match penalty shootout after a 1-1 aggregate draw in both legs of the 2012 CAF African league.

The jubilant Gamtel also arrived on Monday after eliminating Cassa Sport to set a date with AS Real De Bamako. 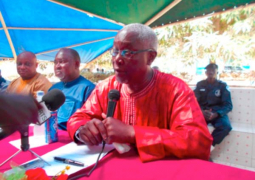