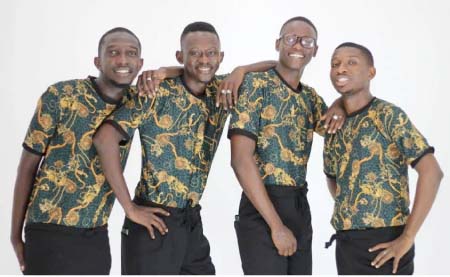 The Bright Stars Entertainment has reaffirmed its readiness to stage a successful second edition of the ‘Ranha Bissap’ show, scheduled to take place on Saturday 16th November, 2019 at the Paradise Suits Hotel in Pancha Mi Hall.

“Preparations are at high-gear and we can comfortably announce that we are set to storm the country with a night of laughter and edutainment that will live to linger in the annals of history,” Momodou Alieu Jallow, the Manager of Bright Stars Entertainment, said in a press conference held in Kotu on Thursday 14th November, 2019.

“Ranha Bissap” is a key local ingredient used in spicing up the sweetness of some local meals consumed by many, both young and the old. The “Ranha Bissap” show is an appetite stimulant geared towards giving the Gambians the platform to enjoy the meal of comedy.

Jallow said the ‘Ranha Bissap’ 1th edition focused on rejuvenating and bringing about smiles on the faces of the audience and that the 2nd edition will focus more on ending all negative ideas around tribalism. This, he added, is aimed at fostering peace and unity between people from different backgrounds and promoting youth entrepreneurship, love, justice and all creamy ingredients that will lead to national development through the power of comedy, music and theatre.

The show will witness the launch of music compilation and a performance of a play entitled ‘Mariama’.

He noted: “Mariama”, embedded in legendary song and words of wisdom, will depict youth entrepreneurship, tribal interest, commotion, confusion, resilience, solution, and peace, all in a quest to ensure swift development in the smiling coast.’

Bright Stars announced that the chairperson of the Truth Reconciliation and Reparations Commission (TRRC), Dr. Lamin Sise, will grace the auspicious event as the Chief Guest of Honour and several other dignitaries will be present to have a magnetic glimpse of what ‘Ranha Bissap’ has to offer.

There will be many other surprises on stage and the musical performances will be backed by a live band. Reputable musicians, poets and other entertainers will be present to spice up the edutainment night.

While assuring a memorable night of extravaganza, the Bright Stars Entertainment said they are in high spirit and even more excited about the event than the public.

Bright Stars Entertainment (B.S.E.) it is an entertainment group doing all forms of entertainment ranging from music, poetry and stand-up comedy. Established in 2014 through an artist, the group now mainly focuses on stand-up comedy and comedy music on current issues trending in the society especially in our motherland, the Gambia.

The principle aim of this group is to promote and dialogue with the community and promote cross-cultural tolerance as well as educate and entertain the masses through the power of comedy and music.