(Friday, 9th April 2010 issue)
One Siaka Badjie was on 7th April 2010 convicted and sentenced by Magistrate Nying of the Kanifing Magistrates' Court to a fine of D2, 000, in default to serve three months in prison for assault, causing actual bodily harm.

The convict was also ordered to compensate the complainant in the sum of D525 for the cost of medical treatment.

Narrating the facts of the case, Police Prosecutor 319 Jobe told the court that the incident happened in Brikama, when the complainant, Yorro Boye went out with his friends: Sanna Mballow and Muhanadou Julde Jallow.

He narrated that the convict met with them and accused one Muhamadou Julde Jallow for stealing his properties. He said when he attempted to conduct a search on him a quarrel ensured.

He adduced that the complainant then intervened to separate them when the convict took a broken bottle and stabbed the complainant, resulting in serious bodily harm.

Subsequently, he added, the convict was apprehended by a group of people and taken to Serrekunda Police Station where he was cautioned and charged with the offence committed.

He further informed the court that the complainant was taken to Serrekunda Hospital and later referred to the RVTH for treatment. 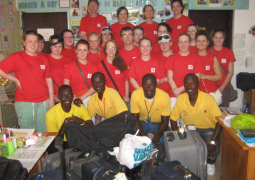