yesterday benefited from a handsome donation of sporting materials from Notts County Football Club in the United Kingdom (UK) as part of their contribution towards the promotion of grassroots football in The Gambia. The donated items include two sets of jersey and a football.

Speaking at the presentation ceremony held at the KG5 Mini-stadium, Mr. Frank Beeton said the donated items would go a long way towards helping the academy.

He also expressed his readiness in supporting the academy in the near feature.

Dr. Alhagie Cherno Jagne revealed that "the linkage between Notts County Football Club and Banjul Sports Community is through School for Progress in The Gambia."

Mr. Majorr Saine, the Assistant Coach of expressed delight at the gesture and thanked Notts County Football Club for the support given to them. 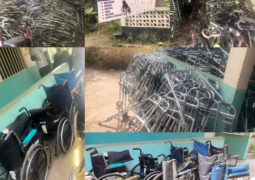 Differently abled persons, hospitals boosted with over $1000 worth of mobility devices