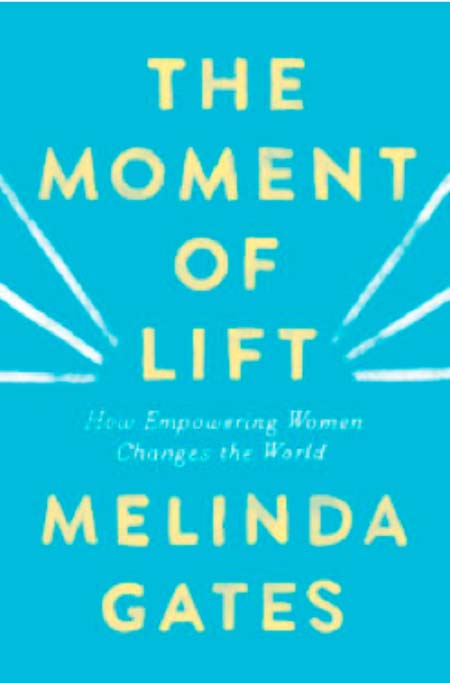 In the past two decades, Melinda Gates has worked on some of the greatest challenges in global health, including making vaccinations and family planning more widely accessible. In her new book, The Moment of Lift: How Empowering Women Changes the World, she pulls everything she’s learned together to come up with one major takeaway: When we lift up women and girls everywhere, it benefits us all.

Before you dismiss this as another social justice do-gooder book by a wealthy white woman, don’t. Gates’ book is a smart, thoughtful and passionate look at the problems behind inequality among some of the most marginalized populations in the world.

To build her case, Gates uses her on-the-ground experiences, the stories of the extraordinary people she meets, and what she’s learned at Microsoft and the Gates Foundation. She also gets personal, sharing her stories as a daughter, student, wife and mother.

Oh, and there’s plenty of data and research to back it all up.

Gates’ overall message is that we must lift women and children, especially young girls, above the many excruciating obstacles they face and give them the power to shape their lives. In turn, women who have power to make their own choices pay it forward in their communities, which helps everyone lead happier, healthier lives. If this all sounds a little too idealistic — after all, what does a poor woman in Africa have to do with your happiness? — Gates is here to tell you why it matters.

Time and again, the people and organizations Gates supports show that when societies allow women more power of their lives, it translates into better communities for all. Businesses are built, children are educated, agricultural advances are implemented, and modern healthcare practices prevail. When women are allowed to make decisions, they tend to choose things that benefit their families and communities, lifting everyone up, “Because sometimes all that’s needed to lift women up is to stop pulling them down.”

Advocate for basic rights in the worst circumstances

While the Gates Foundation had focused on vaccinations and maternal healthcare for years, Gates writes that her first major step as a public advocate was with their family planning initiatives. Through their work with vaccinations, they’d learned that when women were in charge of their reproductive health it allowed them to space pregnancies and control the number of children they had, resulting in healthier children and families. “It took us years to learn that contraceptives are the greatest life-saving, poverty-ending, women-empowering innovation ever created,” she writes.

As a Catholic, Gates took a lot of heat for her belief that all women need access to contraceptives, but she held her ground, and in many ways, this is the moment when Gates stepped out from the Foundation to become the leader she is today. The contraceptive battle marked “just the beginning” in her work for women. She realized that gender equity — getting girls to school, letting women run their own businesses — would be essential to lifting women up.

“As women gain rights, families flourish, and so do societies,” she writes. “That connection is built on a simple truth: Whenever you include a group that’s been excluded, you benefit everyone. And when you’re working globally to include women and girls, who are half of every population, you’re working to benefit all members of every community. Gender equity lifts everyone.”

Travelling and talking with women about family planning and contraceptives laid bare many more of the worst atrocities women face worldwide: Female genital cutting, child marriage, rape, domestic violence, unpaid labour, sex work. Gates’ stories of meeting these women are heartbreaking but necessary reading, especially for people in the West who may not be as aware of these common practices as they should be. Extreme poverty and isolation is devastating to women and makes it almost impossible for them to provide for and protect their children. As a result, the cycle of abuse and poverty continues.

Often when Gates and her colleagues go into communities suffering from these troubles, there are simple tools and techniques — access to education being one of the most vital — they can use to help, but it doesn’t come down to that. As she writes, you can’t go in and fix problems for people, you must listen and work with the people they trust from within. “It’s a delicate thing to initiate change in a traditional culture. It has to be done with the utmost care and respect … Local people have to lead.”

Women’s rights in the U.S.

Despite our many gains in the United States, we are still in perilous times with women’s rights, especially when it comes to access to birth control and family-planning clinics. We still haven’t achieved pay equality. We still don’t have paid maternity leave. We still don’t support working moms (and dads) as much as we could or should. And women are still discriminated against and harassed in the workplace.

Gates spends quite a bit of time discussing inequalities in America, including the current administration that is “working to dismantle programs that provide family planning and reproductive health services.” She argues that eliminating programs that serve teens and low-income women is a huge mistake. “It’s the mark of a backward society — or a society moving backward — when decisions are made for women by men.”

Gates shares her own history of battling for equality. Before her marriage to Bill Gates, she admits that she was in an abusive relationship, which stripped her of her sense of power and confidence. After she married Bill and had her first child, she realized that parenting, even with a lot of help, comes with its own disparities in workload.

At one point, she’s so frustrated with the imbalance of parenting work that she complains to Bill about driving their daughter Jenn back and forth across the bridge to school. Bill said, “I can do some of that,” adding that he’d love to spend the extra time talking with his daughter. The result? Melinda starts noticing other fathers doing more of the school driving. “So I went up to one of the moms and said, ‘Hey, what’s up? There are a lot of dads here.’ She said, ‘When we saw Bill driving, we went home and said to our husbands, Bill Gates is driving his child to school; you can, too.’ ”

At Microsoft, Gates admits that her success came from having a wonderful female boss who encouraged her to be herself and follow her style, even in the high-pressure early days. “If I had tried to do it on my own without colleagues who encouraged me and a boss who supported me, I would have failed,” she writes.

She talks about how the tech industry has a long way to go to work on gender biases, which start in childhood as boys are more encouraged to play with computers and video games. The gender biases only increase from there, throughout school and into the workplace.

For Gates, she’s seen that when women stand together to tackle hostility, work for pay equality, and career advancement, they tend to get further, especially with the #MeToo movement. Her argument for including women goes beyond the tech workplace. Women need to have more access to VC money, and women need to be a part of research and development for important advancements like AI to avoid bias being programmed into the technologies.

As she puts it, “It matters who writes the code.”

Girls who go to school feel more confident and powerful. Women who are allowed to choose if and when they have children are more powerful. These women then work for the betterment for all lives in their communities, creating a tide of positive change that ripples throughout.

No one is more aware of what it looks like when billionaires sweep in to solve the problems of people who live on the poorest and most neglected margins of society than Gates. She openly acknowledges this, wrestles with the concept, and defers to experts in their fields on every point who know more than her.

She also openly acknowledges the head starts, good luck and privilege that has helped both her and Bill succeed. There is an authenticity to both Melinda and Bill’s need to learn more about the “why’s” and their wish for positive, peaceful change that resonates in every chapter.

And if it takes the story of a “rich American lady” to push these issues forward, bring it on. Gates is doing the important work right now she was meant to do: Directing much-needed attention and resources to women’s issues on a global scale. The Moment of Lift is an important primer as to where we’re at in this fight — and what everyone can contribute for a better future for all.