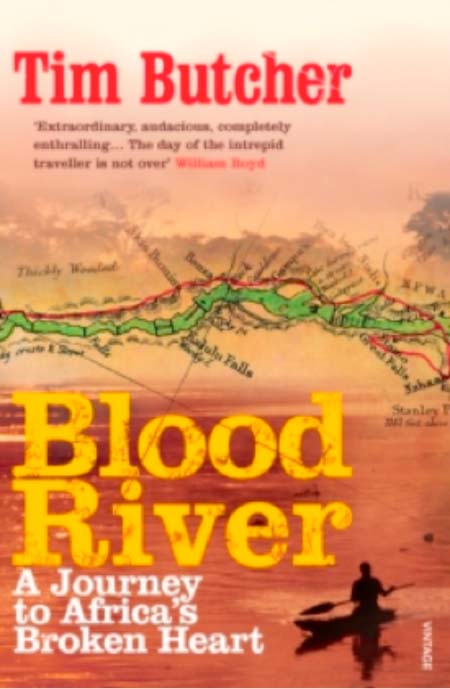 As a journalist Tim Butcher had covered stories from all over war torn Africa, but it was the system of corruption and secrecy veiling the Congo that sent him on an adventure quite unlike anything he had done before in his book Blood River. Following in the trail of the explorer H. M. Stanley, who was the first to map out the interior of the Congo in 1874, Butcher traded the comfort of hotels and aeroplanes for the back seat of a motorbike and the traditional pirogue, a canoe hollowed out of the trunk of a tree.  Starting on the Congo’s eastern border in a small ghost town that reeked of colonial decay,  the author set out on what many declared an impossible task: to follow the Congo River from its source all the way to Boma in the west, just short of the river’s mouth.

In the wake of a 2003 peace agreement thought to put an end to one of Africa’s bloodiest wars, the country Butcher explored showed no signs of the stability the outside world may have expected. Throughout his journey he was warned off by UN workers and government officials, but somehow still managed to find people brave enough to risk their lives to help him on his way. Benoit and Georges, two such figures, accompanied the author through the dangerous bush of the Katanga province, where the mai mai, one of the most feared tribes of the eastern Congo, are traceable only through word-of-mouth and the destruction they leave behind them.

Walking a thin line between adventure tourism and something more substantial, it is the author’s great knowledge of the country’s history, his ability to convey scenes and characters in crisp prose, and his interpretation of the complex situation of the Congo today that saves this story from becoming another outsider’s account.

There are the poor who struggle beneath their loads of palm oil for hundreds of kilometres living only off of fresh water and food that they can forage in the bush, for pay that translates into almost nothing. There are the tribes whose day-to-day existence revolves around fleeing from armed rebel forces, only to return to villages that have been plundered and destroyed. And then there are the foreigners, the traces of a colonial system of greed still in place, taking the country’s mineral wealth with little more than small payments made to corrupt officials going back to its people.

Butcher had not only the courage, but the insight to tell a great story of a country struggling to emerge from a history of colonial rule, bearing the brunt of the modern world in all its indecency.

The current situation of the Congo can be summed up well in the words of a mayor Butcher encountered in a small town in eastern Congo: “I am the mayor, appointed by the transitional government in Kinshasa. But I have no contact with them because we have no phone, and I can pay no civil servants because there is no town or post office where money could be received, and we have no civil servants because all the schools and hospitals and everything do not work. I would say I am just waiting, waiting for things to get back to normal.”