Blackpool FC are through to the quarter-finals of the ongoing Serrekunda West Knock-out Championship, following their slander narrow 3-2 victory over Bundas FC on penalty shoot-out after the 90th minute of play ended 1-1 at the Serrekunda West Mini Stadium last Wednesday 14th October 2009.

Blackpool FC who were determined and hungry for a victory to proceed to the next round of the championship mounted heavy pressure on Bundas FC's defence line and made some occasional goal scoring chances. But they failed to capitalise on their limited scoring chances, and thus the first half ended 0-0.

As actions resumed in the second half, Bundas FC were more compact in the midfield and made some assaults in front of Black Pool FC's goal mouth. As a result, they opened the tally through substitute striker Modou Lamin Gassama in the 59th minute of the game.  Black Pool FC fought hard and leveled the tally through substitute striker Kebba Badjie in the 71stminute of the game, which pushed the game into a penalty shoot-out, thus the match ended 3-2 in favour of Black Pool FC. 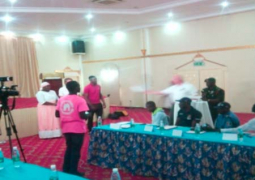