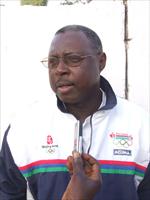 Continuing his testimony under cross-examination, Lawrence Bruce, Executive Director of the Gambia National Olympic Committee, GNOC, on 23 March 2011 told the Kanifing Magistrates’ Court before Magistrate Tabally that he knows that Beatrice Allen, Ousman Wadda and Muhammed Janneh did not take the monies that are the subject matter of the case.

The prosecuting officer Superintendent Camara rose to say that he was objecting to the tendering of the documents.

He argued that the said vouchers bore the name of Abou Dandeh Njie, who has never testified in court.

Superintendent Camara further argued that the second prosecution witness had no connection to the issue, as far as the documents were concerned.

He further argued that the documents had different ink, blue and black, meaning that it could have been written by different people.

Magistrate Tabally overruled the objection made by the prosecution and admitted the documents tendered.

“Monies that are the subject matter of this case are payments that were made when Lang Tombong Tamba was the president of GNOC,” the defence counsel told the witness, “Yes,” he answered.

“It is true that GNOC has no authority to stop those allowances under the rules,” the defence counsel stated. “I have not seen rules saying otherwise. I am not aware,” said the witness.

“You also know that monies that are the subject matter of this case were not taken by the accused persons,” the defence counsel put it to the witness.

“I know that they were not taken by the accused persons,” he responded.

The third prosecution witness, George Gomez, in his testimony, said he lives at Sukuta and is retired.

He stated that he recognized the accused persons, adding that he was working at the GNOC.

He further testified that on 13 December 2010 he was in town, and that a lot of things had transpired in December 2010.

He adduced further that he worked with the accused persons for a long time, and many things transpired.

“I don’t know why I am in court. Somebody, whose name I don’t know, called me and told me that I should come to court,” the third prosecution witness told the court.

At this juncture, Superintendent Camara applied to the court to discharge the witness.

His application was granted, and Mr. George Gomez, PW3, was discharged and he walked out of the witness box.

Before doing so, he said under cross-examination that he ceased to be with the GNOC in September 2010.

The case was subsequently adjourned till 28 March 2011.