Omar Jallow, alias OJ, the Peoples’ Progressive Party (PPP) Leader, recently said the people of Banjul have manifested that they are the one who decide their own destiny in terms of electing their representatives into public office.

He said this was manifested when Gambians did a convention to elect Adama Barrow as Gambian President through a Coalition Government, ending the Yahya Jammeh’s APRC Government on 18 January 2017.

He said the strategy for the Coalition was to elect a President, National Assembly and Local Government representatives, to review unfriendly laws, formulate laws and policies, and approve projects for development programmes for the citizenry.

He said initial plans were to contest as Independent Candidates under the Coalition Government to support Adama Barrow in Parliament, because according to him, no project can be implemented by Government without Parliamentary approval. “Parliament is more important than the Presidency because they can remove the president,” he added.

Mr Jallow noted that following the Coalition break away ahead of the parliamentary elections, individual parties contested against each other, instead of contesting as Independent Candidates under the Coalition- as agreed, as they did in the case of Adama Barrow. While some attempted to form Tactical Alliance, Banjulians came up with a convention to elect Parliamentary Representatives.

James Gomez, Fisheries Minister, a PPP member, explained that Team Tahawal Banjul was the name given to the committee that took applicant candidates through Primaries, leading to selection of three candidates for Banjul Central and South, a male and female drawn from the PPP and for North from PDOIS party.

All the candidates selected by Team Tahawal Banjul won the 6 April 2017 Parliamentary Elections.

OJ, who is also the Agriculture Minister, said Team Tahawal Banjul looked at those they believe would serve Banjul’s interest, adding: “What we see is Banjul, not party or individual interest. Those elected want peace for Banjul, and love Banjul.”

Jallow said Banjul is backward because they give their good things to outsiders, but expressed hope and confidence with the renewed spirit. 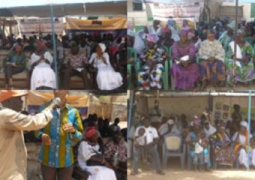 Scorpions Encamp Ahead of Saturday's Cracker