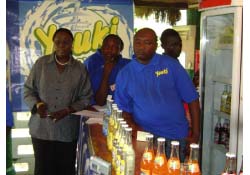 As part of its quest to build up the local domestic market, Banjul Breweries Gambia Limited, the home of Vimto, Cocktail and Malta among other beverages last Thursday 7th October 2010 launched another Youki brand to join its current ones in the fridges.

The launching, which comes just one year seven months after the company launched four brands of the Youki flavour, is seen as part of the company's relentless effort to give maximum satisfaction to its ever growing customers.

Apart from the Cocktail, Malta, Youki Grapefruit, which is exactly like the old bitter lemon, Youki Pineapple, Youki Lemonade and Youki Soda water, Banjul Breweries now have in their flavours Youki Tonic. The Youki Brand, a product of Castel Groupe in Paris, who owns about 50 breweries around Africa, among others seek to meet the expectation of the company?s customers.

Speaking at the launching ceremony held at the company's head office, Mrs Fatou Sinyan-Mbergan, Financial Controller and Head of Administration Banjul Breweries Limited underscored the important role played by Banjul Breweries Limited towards the socio-economic development of the country, noting that the company has being  in existence since 1979.

The Youki Tonic, she added, is the seventh product introduced by the company since year 2000. According to her, Banjul Breweries will always lead the market and others follow, because as she puts, the company will not relent its drive to produce quality products and services to the Gambian populace.

"As a pioneer company in The Gambia, Banjul Breweries Limited is here to ensure that the company produces the best in the country. Since 1979 to date, this company has made a big difference in the manufacturing industry," she said, while challenging other manufacturers to emulate the company. She further assured that the Banjul Brewery is always here to ensure that its customer?s interests are met.

For his part Mr Franck Boeuf, Country Sales and Marketing Manager Banjul Breweries Limited said the company's first priority remains the provision of quality products to help in improving the Gambian market. This, he said, can only be achieved through collective responsibility and team work to ensure that the new product penetrate into the market.

According to Mr Franck, Banjul Breweries Limited will continue to produce the best products in the country. He expressed delight to their customers for the patronage, noting that all what the company needs is the cooperation of their customers. He assured that more developments are in the offing.

Also speaking earlier, Mr. Borri Darboe, Sales and Marketing Supervisor stated with pride that "Banjul Breweries limited is a non-competitor to other manufacturers in the sense that the company is above them and is the leading manufacturer in this country."
The company's mission, he added, is to produce high quality products in the country, noting that the company has been doing its level best to ensure that it meets the needs and satisfaction of its customers. He also acknowledged the support the company continues to enjoy from its customers and government, noting that Banjul Breweries Limited will always help in complementing government?s effort.

"I want to make it very clear to our customers that Banjul Breweries Limited does not import products. So all that we want is to ensure that our products especially this latest Youki tonic is in every household," Darboe said, adding that the product came at the right time.

He commended the management of the company for the initiative, while challenging customers to help in ensuring that the product penetrates into the market. According to him, Banjul Breweries Limited will go extra mile to produce the best and quality products in the country. "We don?t compromise with our product," he said, assuring customers that their relationship with the company will grow from strength to strength.

"Banjul Breweries want to show to the people of this country that this company belongs to them and all should endeavor to give it the needed support," Darboe added.

At the end of the launching, customer upon customer who spoke to our reporter expressed satisfaction and appreciation about the new product, noting that it will surely get into the market.

They commended the management of Banjul Breweries for being the leading company in the country, while assuring them of their support at all time.