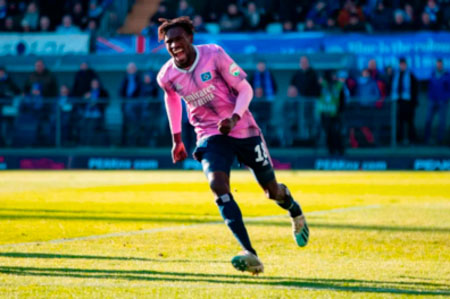 Gambian midfielder Bakery Jatta has scored his third goal of the season during his club (Hamburger SV) 2-2 away draw against Darmstadt 98 in their week-eighteen fixtures of the Bundesliga (Germany Second Division League) played at the Merck-Stadion at Bollenfalltor.

The 21-year-old scored his side’s second goal in the 45th minute, just before going into the break, while Lukas Hinterseer scored Hamburger SV’s opening goal in the 18th minute.

German attacker, Serdar Dursun scored a brace for Damstadt 98 in the 32nd and 58th minutes of the game. The strike marked the third for the Gunjur-born player in 15 appearances.

The draw has now moved Jatta and his Hamberger SV to 2nd position in the league with 31 points, while Darmstadt 98 sits 12th position with 21 points after eighteen games.

Serekunda East Nawettan Get to Second Round Stage