The Gambia’s Afro-Manding singer Badibunka has revealed that he has verbally terminated his contract with Shy Boy Entertainment.

Under the contract agreement, which started in 2010, Shy Boy Entertainment was responsible for recording all songs by Badibunka. All bookings that involved the singer were also handled by Shy Boy and proceeds shared on a percentage basis.

“The proceeds of all Badibunka’s performances are shared on percentage basis, with Shy Boy getting the highest percentage,” an insider told entertainment outlook.

“Yes, I left last week but we are yet to sign the contract termination on paper,” Badibunka said on April 17, 2013.

The singer, whose real name is Lamin Touray, said: “I visited the studio to sign the contract termination, but producer Alhassan Jallow (Hansin) was busy. As at now, the contract has been terminated verbally.”

“I am willing to work with any record label in the country and with or without Shy Boy Entertainment I will make my name in The Gambia music scene,” he said.

The singer said he has “no problem” or “grievances” with the local record label.

“We don’t have any problem or grievance. Hansin is very busy and his promotion was very slow, that is the reason I terminate the contract,” he revealed, saying that Hansin is not concentrating on his projects and that is not good for him.

He said further: “I have so many projects to work on. Remember, I came from Baddibou; so I am not here to joke but for real business.”

He added that he is going to work extra hard now as he is working as a solo artist.

Badibunka began his music career in 2009 and soon became a crowed-mover on stage with his Afro-Manding performance style. He was signed by the record label, Shy Boy Entertainment, in 2010.

The artiste who hailed from Saaba village, Baddibou district of the North Bank Region, released his debut album “Jamba Sang Sang” in 2012 which is produced by Shy Boy Entertainment.

He is part of the famous “All Star Riddim” produced by Shy Boy Entertainment in October 2012.

His latest single “Kanumousou” is a Mandinka parlance meaning “Dearest Wife”. He featured female vocalist Sandeng of the Humanity Starz in the single recorded at Shy Boy Entertainment. 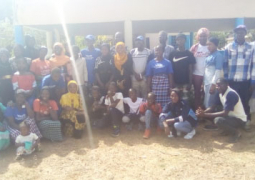 Beakanyang sensitises over 30 youth in WCR on FGM/C, Human rights