Ebrima Tamba Jammeh, Chief of Badibou Illiasa constituency, has commended the leadership of NACOFAG for going to congress to report back to their electorates, after years of struggle.

He said the role of NACOFAG is crucial in organising and coordinating farmers and communities to work with a common vision and objective.

Chief Tamba Jammeh also advised farmers to respect and be committed to the Vision 2016 call of the Gambian leader, President Yahya Jammeh.

The chief made this comment while delivering a statement at the 3rd national congress of NACOFAG recently held in Farafenni, North Bank Region.

Also speaking on the occasion, Alhaji Basse Mboge, president of the National Farmers Platform - The Gambia, commended FAO for its support to NACOFAG in the preparation of the national congress.

He explained that the congress was also meant to seek policy directions for the next three years.

Mr Mboge called on all stakeholders to support the NACOFAG in the areas of capacity building, awareness creation and information sharing.

The outgoing president of NACOFAG, Muhammad Lamin Fayinkeh, hailed the delegates of the national congress.

He commended all those who contributed to “the smooth development” of the organisation during his tenure.

The newly elected president, Musa F. Sowe, thanked NACOFAG partners including FAO, IFAD, and the Ministry of Agriculture for supporting “the successful implementation of the congress”.

He promised to strengthen the bilateral relations that exist between NACOFAG and other sub-regional, regional and global networks with a common objective. 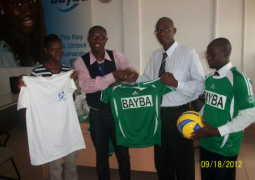