Senior Magistrate Abdoulie Mbacke of the Kanifing Magistrates' Court yesterday 7th September 2009 told the court that "bad foreigners" are not welcomed into the country.

This comes in the wake of the conviction of one Modou Njie and Babucarr Sanyang, who were charged with attempting to commit a felony and wilful damage to property.

Delivering his judgment, Magistrate Mbacke stated that Babucarr Sanyang was a foreign national from Guinea Bissau, who had been staying in the country for eight years without paying for his alien identity card for six years.

He added that the convict was a fisherman who had never put a single butut into government's coffer, but instead molests citizens of this country.

"Such foreigners should be given a hand shake and asked to leave the country", he said.

In his plea of mitigation, the first convict told the court that he was in custody since August 2008, and thus craved the court's indulgence to temper justice with mercy.

The second convict also made the same plea.

Magistrate Mbacke in passing down the sentence, said the court had heard the plea of leniency by the convicts, but noted that they deserved some punishment. He stated that the courts and law enforcement officers would not allow such malpractices to happen.

He said both sentences would run concurrently, and that the second convict, Babucarr Sanyang would be deported to his country of origin after serving his sentence. 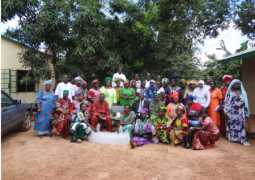