His compatriot Aziz Corr Nyang who missed that match, was VALLETTA’s hero on Saturday when he hopped off the bench to score the winning goal in a 1-0 defeat over BALZAN YOUTH at home.

Nyang’s 84th minute strike brought joy and relief to VALLETTA fans as they continue to maintain the second spot in the rankings with 3 points behind Birr KI Karra who also beat VITTO RIO SA - STARS by 4 - 1.

Meanwhile HAMZA who was twice denied on target, first had the chance in the 10th minute when the BALZAN goal keeper dived on the right to parry his closed-range header from a set piece.

Again in the 22nd minute, the woodwork denied VALLETTA another goal scoring luck, when their overlapping right back exchanged some wicked passes to set up an agile HAMZA, whose low drive hit the foot of the post.

Consequently with the game ending to a goalless draw, senior man - AZIZZ CORR NYANG, broke the deadlock with a perfectly-struck shot from the edge of the area, six minutes from time. VALLETTA travels to NAXARR LIONS next Saturday for an FA CUP second round tie.

PA MODOU JANGE’S club FC SION still await vital victories as their campaign to climb out of the bottom table suffered a setback when they slumped to a back-to-back defeat in  the 2nd weekend league games.

They lost to FC ZURICH and LUASSANNE SPORTS 1-0 and 2-1 respectively. NDA who has the ability to break up play and drive forward when given the opportunity is a strong pillar in the club. He was handed 13 appearances out of 18 in his first year with the club.

MUSTAPHA CARAYOL’S Middlesbrough were held to a goalless draw on Saturday by BLACKBURN ROVERS. That was their 3rd similar score-line in a row which has reduced MIDDLESBROUGH’S drive into the top 6th places - play-off spot as they slipped down to 12th position with 12 games to spare in a 24- team log.

CARAYOL, a popular winger within the fan base, can attack from both flanks and he is also among the club’s top scorers this term.

The Gambian has bagged 7 league goals under his name in 28 appearances out of a possible 30. 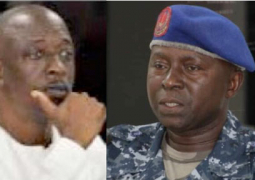