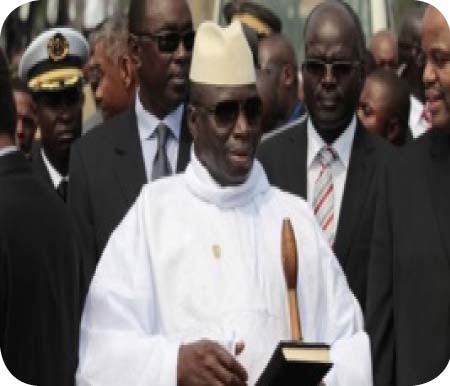 Boko Haram, Al-Shabab, a recent attack in Burkina Faso and the growing influence of the Islamic State group, terrorism is a serious threat to the already fragile peace and security situation on the African continent.

Gambian President Yahya Jammeh, speaking Saturday at this weekend’s African Union summit, called on his fellow heads of state to work together to counter terrorism in Africa, including the threat posed by Islamic State, also known as ISIL.

“The arms that are coming in must have been purchased by someone and handed over to ISIL, or any of these terrorist groups,” Jammeh said. “We must,as a continent, look at which countries are collaborating and stop it.”

Burundi, a country dealing with a violent political conflict since last year April, is part of an African force fighting the terror group Al-Shabab in Somalia. At the same time, African leaders are expected to come up with a solution to the crisis in Burundi, which has refused to allow in African peacekeeping forces. Some countries, including Gambia, share Burundi’s concerns and say no peacekeepers should be deployed to a country without its consent.

“Counterterrorism strategies that lack due process and respect for the rule of law will be counterproductive,” he said. “Extremism flourishes when rights are violated, political spaces shrink and people are marginalized and excluded.”

Kenya and Nigeria, each of which has faced numerous terrorist attacks, have both been elected for a three-year term on the African Union Peace and Security Council

GLMA convenes consultative meeting with stakeholders ahead of Ramadan