Gambian player Arthur Gomez is playing his football in the Republic of China with a first division side Henan Jianye FC.

Arthur was on loan with Antwerp FC in Belgium from Manchester United in 2002/03 season till 2006/07 season before joining Dessel Sports in 2006/07 season and finally moved to the Chinese giant Henan Jianye in 2007/08 season.

Arthur was born in The Gambia on December 2nd 1984.

The 178cm forward is making a name for himself in the Chinese capital with his club Henan Jianye FC.

It will be recalled that Arthur Gomez's last appearance for The Gambia national team was in 2003, when The Gambia visited Senegal in Dakar in the World and African Cup qualification round. 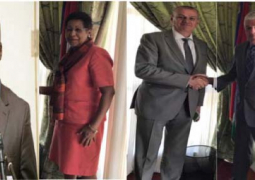