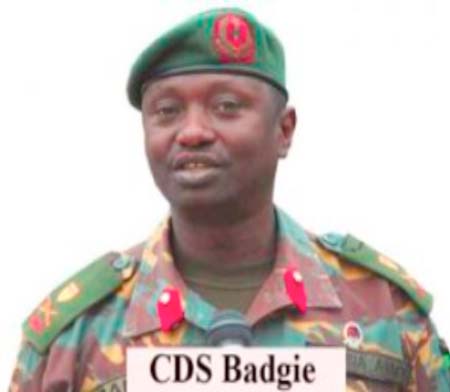 The Chief of Defence Staff General Ousman Badjie and his immediate assistants, at a press briefing held on Saturday at the Armed Forces Headquarters in Banjul, said the Gambia armed forces under his command would give their fullest support and allegiance to President Adama Barrow and his government.

“We members of the security services pledge our loyalty and sincere allegiance to President Adama Barrow.

“We The Gambia Armed Forces under my command as we gave former president Jammeh 100 percent allegiance and support, we will give President Barrow 150 percent support and allegiance, and prove to the whole world that we are one of the best armed forces in the world…I swear to the Almighty  Allah that we will do this.”

He also appealed to the media to inform the world that The Gambia is peaceful and calm.

“The media should let the world know that The Gambia is peaceful, and let those who have fled come back and they will be protected more than before.”

More than 3000 tourists also have left the country; hence the hotels are virtually empty, according to sources in the tourism industry.

The rise in the price of basic commodities