The 2009 Gambia Football Association (GFA) Division One League Champions Armed Forces were yesterday held to a 1-1 draw in the hands of D' Dolphin FC a team, made up of West African players in a friendly encounter at the Father Gough Sports Complex in Manjai Kunda.

Both teams showed wonderful talents and put up brilliant performance during the first period of the game but could not break the deadlock, thus the first-half ended 0-0.

As action resumed in the second period of the game, D' Dolphin FC opened the score line through Bamba Sallah. Armed Forces fought back and leveled the score sheet through striker Kaba Jobe, thus the game ended 1-1.

Speaking to the Assistant Coach of Armed Forces, Adama Jatta, shortly after the game, he said his expectation of winning the super cup against Young African on Friday 18th December 2009, are very high.

Assistant Coach Jatta further expressed confidence of winning the super cup, noting that they have the materials and players to win the game.

For his part, the Head Coach of D' Dolphin FC, Mike Ezeji revealed that his expectation was to win the game.

Head Coach Ezeji also revealed that they came to defend the game because they did not know Armed Forces very well, adding that the game was not up to professional standard. As he put it, he was not impressed with what he had seen in the last minutes of the game.

He further revealed that his team is made up of West African players.

In a separate development, Darosalam FC and Jarinton U-15 will square up in a knock-out final of the ongoing Manjai Knock-Out Championship, at the Father Gough Sports Complex in Manjai on Sunday 6th December 2009.

Jarinton U-17 made it to the final following a deserved victory against Marimo FC after a penalty shoot-out, while Darosalam also progressed to the other final after edging pass their semi-final opponent recently. 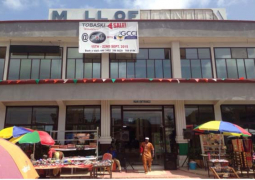