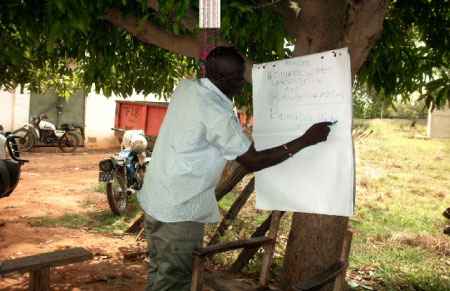 Through the project, community members were mobilised and sensitised on invasive aquatic weed removal on water bodies such as tributaries (bolongs) and along the river banks.

Njaga Bonko Jawo, executive director of NAWFA, said the meeting raised awareness on the issue and mobilised communities for greater participation and effective management of the water bodies that serve as source of living for many people.

“This innovation started in as a member country, and they are advanced in the system in such a way their services are hired in The Gambia to replicate such innovations in The Gambia,” he said. “This is a pilot project in Central River Region because this region is the most affected region according to reports from a survey.”

Jawo added that the project, which is being implemented in six countries in sub-Saharan , has a lifespan of three years.

He said water bodies have invaded different types of aquatic weeds that seriously affect the livelihood of the local people who live around water bodies.

“Water bodies are major sources of food such as fish, irrigation for agriculture, livestock drinking points, among others,” Jawo noted, saying that was what prompted the government and its development partners to introduce the weed project to meet household food security.

Alkali Kobba Camara of Pallang Mandinka, a member of the committee, opined that the removal of the invasive aquatic weeds around the water bodies should be an ongoing exercise.

She suggested that an excavator be hired that would not only uproot some of the weeds but also used to re-dig bolongs to allow smooth flow of water in an out for the benefit of all and sundry.

Sainey Camara, secretary of the village development committee (VDC), also a member of the weed committee, said the importance of the weed removal cannot be over-emphasised, as while it reduces flooding, farm irrigation and fishing become easy.

According to him, the weeds are resources in other areas, as they can be used for the production of mat, charcoal, sweeping brooms, decomposed substance for manure, roofing, fencing and other essential items without going to the forest.

Demba Jawo of NAWFA commended the committee for its members’ commitment and dedication towards the project.

The committee should work hand in glove with NARI in the implementation of the project, he advised.