Antwerp-Banjul Challenge at the weekend donated an ambulance to the people of Niani Sukuta village in Niani district, Central River Region North.

Speaking at the handing over ceremony held at the community bantaba in Niani Sukuta, Lamin Jammeh, who facilitated the donation, called on the people of the area to make the best use of the vehicle.

"When properly maintained it (the ambulance) can equally serve long," he said.

Mamat Mbye, chairman of  Kuntaur Area Council, hailed Antwerp-Banjul Challenge for the gesture, saying: "This humanitarian gesture will go a long way in assisting the people of Sukuta in terms of transporting patients to a nearby hospital."

He added that the donation of the ambulance will improve the service delivery of Kuntaur Area Council.

For his part, Jay Jay Kandeh, a community leader, also applauded the donors for the "laudable" gesture.

The ambulance "will ease" the transportation of patients from the village to the nearest health facility - Kuntaur Health Centre, which is far from the hospital, Kandeh said, while assuring the donors that the ambulance will be put into good use and properly maintained.

Antwerp-Banjul Challenge's representatives Kelvin Jan, , Bran, Tanja and Jam witnessed the handing over of the ambulance to the community, a ceremony attended by a cross-section of people in Niani Sukuta. 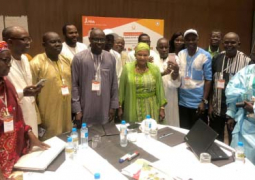