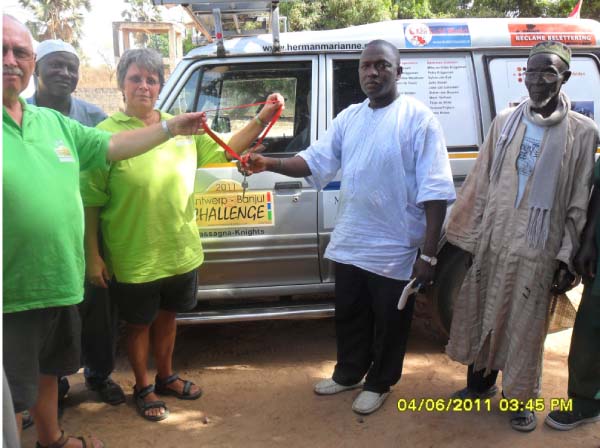 In his address on the occasion, the National Assembly Member for Foni Bintang Karanai, Ebrima Solo Jammeh, expressed gratitude to the donors of the ambulance, Mr Hermanne Krijgsman and wife Mrs Marianne Van de Velden, through Antwerp-Banjul Challenge, for coming to the aid of his people.

NAM Jammeh commended the couple on behalf of the seventeen villages in his area for what he described as laudable gesture  to the people of Kassagne in particular the entire Foni Bintang Karanai people.

He said the clinic is in Kassagne but it is for the entire district that should benefit from the ambulance. He promised the donors that the ambulance "will be taken care of".

Hon. Jammeh outlined some of the problems at the clinic saying key among them is the shortage of electricity, water, and medical equipment.

He promised the donors that the standards of the clinic "will never be compromised" and appealed to the donors to continue helping the clinic and the district.

Gibril Ceesay, the Alkalo of Bintang village, who is also the eldest alkalo of the district, spoke on behalf of the entire Alkalolou in the district. He commended the NAM Ebrima, Solo Jammeh for having concern for his own people.

He also thanked the Gambian leader for creating an enable environment for the people of the Gambia, which made donation possible. "Without peace and stability this gathering would not have been possible," Alkalo Ceesay said.

Mrs Nano Touray, who spoke on behalf of the women in the area, expressed her gratitude to the couple for their timely donation of ambulance.

She said that would reduce the burden from the women in the area who use donkey carts to travel almost 15km to the nearest health facilities outside the district.

"This ambulance was donated to help the women of the district because as women we are the people who suffer when it comes to sickness issues and I am expressing my profound gratitude to our NAM for getting this ambulance for his own mothers, sisters, nephews and daughters on time," Nano Touray said.

Masanneh Jammeh, a member of the clinic committee, said the clinic started operation in long time ago but due to political problem it was out of operations for many years, until recently when seventeen villages in the district deemed it necessary to upgrade the clinic to standards.

Mrs Marianne Van de Velden, for her part, said highlighted some of the problems they faced in bringing this ambulance to the doorstep of the people Kassagne.

She said the ambulance was available to the people Foni Bintang Karanai District through their Gambian counterpart Lamin Jamba Jammeh and the NAM for the area Ebrima Solo Jammeh.

She urged the people of the area to take good care of the ambulance if they want it to serve them long.

Other speakers on the occasion included Buba Jagne, Federation Manager; Dinding-Bantaba, the main sponsors of the clinic since at the initial stage; the Alkalo of Kassagne Alhagie Solo Beyai and Lamin Jamba Jammeh, Antwerp-Banjul Challenge focal person in The Gambia.