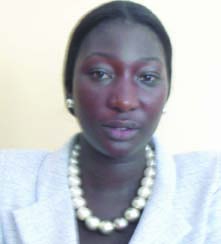 Judicial sources has confirmed to The Point the appointment of Fatou Jeng, a recent graduate of the University of the Gambia School of Law as a First Class Magistrate effective last July, bringing the number of UTG graduates appointed as magistrates to five.

Fatou was among the first law students of the University of the to be appointed 1st Class Magistrate after completing her studies earlier this year.

Confirming her appointment to this paper yesterday, Magistrate Jeng said she felt honoured to be given the chance to serve her country and contribute her quota to the development of The Gambia.

“If other countries can produce their own legal luminaries, I see no reason why we can’t,” she said, adding that as young people, they need to stand firm.

For her, being among the first batch of law students of the University of the , she would strive hard to live up to expectations.

“A clear testimony of this is his engaging of young Gambian graduates in the judiciary,” she added.

Jeng also commended her grandpa, whom, she described as her mentor for the support he rendered her during her studies.

Other earlier appointees were Magistrate Landing Sanneh, Magistrate Lamin Mbaye Senior, Magistrate Momodou S.M. Jallow, and Magistrate Edward Singhateh who all graduated in December 2010 from the Faculty of Law at the .