Information reaching The Point has revealed that the embassy in , in partnership with Ebunjan Theatre Centre, is pleased to announce the arrival of two American dancers in The Gambia.

Nicola Ayoub is an American dancer living and working in for the past six years.

She trained and performed at the Atlanta Ballet and later worked with a modern dance company Full Radius before moving to .

She became a choreographer with her bilingual one-woman show The Language, which was awarded Paris Jeunes Talents in 2008 and first place at the Parisian choreographer contest Tobina in 2009.

That same year she created the 3D Company with partner Guillaume Morgan and dance for the first time at the mythic .

In 2010 and 2011, she performed and taught regularly at La Sorbonne University in and also toured , , , and with her choreography for the public Systeme.

Nicola represented the in UNESCO’s 2011 original production, Astro-Ballet, choreographed by Natalia Guslistava from the Bolshoi.

In 2012, she has performed with Alexandre de la Caffiniere Company and Karma Dance Project.

The other music star, Asha Thomas, received her training in ballet, modern, and jazz dance at The Harrison Dance Studio in and The Ailey School in .

She received her bachelor of fine arts degree from The Juilliard School in in 1999 under the direction of Benjamin Harkarvy and, upon graduating, became a member of the Alvin Ailey American Dance Theater where she was a principal dancer for eight years.

In 2007, Asha relocated to to work as a freelance artiste where she has worked in several productions.

In March 2009, she created and presented her solo The Red Letter at the Antipodes Festival (Le Quartz national theater of Brest) and in 2010 re-launched herself into the creative process with Mi Penita Negra, which was premiered at the Biennial Passages 10 festival held in , by the Dans Art Tanznetworks.

Wishing to further develop her creative works and choreographic voice, Asha Thomas decided in 2010 to create her own company, Compagnie Ima.

Asha recently performed as a guest artiste in the renowned Vail International Dance Festival in , .

The two guests will host a workshop for the Ebunjan Theatre dancers and put up a performance on Friday 6 and Saturday 7 July 2012. 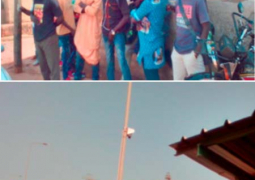