The trial of Kaddijatou Jallow who is alleged to have murdered one Ramatoulie Barry yesterday opened before Justice Moses Richard of the Special High Court.

Testifying before the court, the state's first witness, Dr Abdoulie Alieu Ceesay of the RVTH, who is attached to the Accident and Emergence Unit, stated that he attends to all accident and emergence cases. He added that on 5th February 2009, he examined the body of one Ramatoulie Barry now deceased. He said after the post-mortem he wrote a report to that effect. The post-mortem report was later tendered in court as an exhibit.

Also testifying, the second state witness, First Class Lamin Fatty, a police officer attached to the Scientific Support Unit of the Gambia Police Force, said he is a photographer. He added that he normally attends all post-mortem at the RVTH. He told the court that on 5th February 2009, he was assigned by the Officer Commanding Major Crime Unit to attend a post-mortem at the RVTH.

According to him, during the post-mortem he had taken snap of seven photographs. The photographs were later tendered in court as exhibits.

The state's third witness, a student told the court that on 3rd February 2009, he was at home. He adduced that he did not know the accused, but he became use to her when she visited his brother's house.

PW3 further added that he tried to persuade the deceased to leave, because he knew his brother was with the accused, but she refused, saying that she was ready. He said later he closed his house and went out, adding that at around 5pm his brother called him informing him that the deceased had past away. He said his brother told him that, the accused and the deceased met there and fought, despite frantic efforts to calm them down.

According to him, his brother told him that he was receiving international calls outside and on his return to the house he heard the deceased saying you stabbed me.

The fourth state witness, was Inspector Boto Keita, attached to the Major Crime Unit, who told the court that on 4th February 2009, while on duty the accused was brought to his office from the Serekunda Police Station with a case file of murder.

He narrated that the accused was alleged to have stabbed one Ramatoulie Barry as a result of which she passed away. He said the accused was detained in the office for further investigations.

Inspector Keita further adduced that the incident was alleged to have happened on 3rd February 2009, and during the investigation he obtained a cautionary statement from the accused person in the presence of an independent witness. The statement was later tendered in court as exhibit. 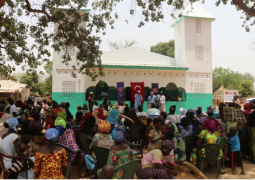