Detective 1st Class 128 Babucarr Trawally recently testified at the Kanifing Magistrates’ Court in the trial of Abas Porgo and Muhammed Jarra, who were charged with shop-breaking and stealing.

They were alleged to have broken and stolen items worth D38,150, being the property of Kumba Daffeh.

Detective Trawally testified as the second prosecution witness and told the court he is a police officer attached to the Latrikunda German Police Post and that he recognised the accused persons.

He said that on 22 January 2011, he was on duty when the complainant, Kumba Daffeh, came and lodged a complaint that her store was broken and some items stolen.

“I departed with my colleagues to the scene and we discovered the breaking,” he explained.

Detective Trawally added that they later met with the 1st accused, whom they were told was the watchman of the store and was questioned and a search was conducted in his house where some items that the complainant recognized as hers were recovered.

The 1st accused told them that he shared the items with the 2nd accused, he said, adding that both were arrested and taken to their office.

He said that during the interrogation, the 1st accused told them the recovered items were given to him by one Ndey Binta Faye, who was working there.

The witness said he later made a statement.

The case, presided over by Magistrate Tabally, was adjourned till 31 March 2011. 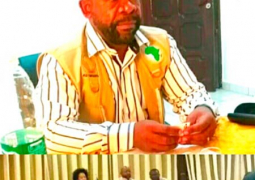