Foday Goddard, a mute who was indicted for allegedly raping an under-age girl sometime last year in Abuko village, recently opened his defence at the Special Criminal Court of the High Court in Banjul.

Foday testifying in his defence before Justice Moses Richards with the help of a sign language interpreter denied having canal knowledge of the said girl.

The young girl always comes to their (Foday's) compound to play with his younger sister, he added.

Whenever the girl comes to play with his younger sister, he (Foday) always avoids her, but the girl always tries to get closer to him.

"I even told my mother about the behaviour of the said girl but she said nothing," Foday told the court.

He also informed the court that he goes to work in the morning, and return at 7:30 pm everyday, and said that he did not see the girl on the particular day, as alleged in the charge sheet.

"I was at home brewing "attaya" one day, and the girl's father came with a car and took me to Bundung Police Station," he concuded.

Under cross-examination by the deputy Director of Public Prosecutions, M. Abdoulli, Foday admitted that the girl came to his house at 2 pm, but he sent her away. He denied that the young girl played with his private parts.

Next to testify for the defence was Foday's own ten-year-old sister, who was the playmate of the alleged victim, and reportedly the youngest witness to testify to date before the Special Criminal Court.

The witness (name withheld as required by law because she is a child) told the court that she lives at Abuko and that accused person is her elder brother, and they live in the same compound.

She also told court that she knows the victim, who happens to be her friend and playmate.

This witness further told the court that on 14th June 2009, which was a Saturday, while his brother was sitting at home, the victim was pulling his brother's trousers and the brother then beat her to stop that act.

Under cross-examination by state prosecutor, M Abodoulli, she maintained that Foday was at home on that day.

The case was subsequently adjourned to 18 March 2010. 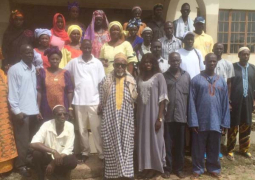