One Fatou Drammeh, a writer and resident of Tallinding, recently testified before Magistrate Ibrahim Kijera of the Bundung Magistrates’ Court, in the trial of obtaining money by false pretence and conspiracy to commit a felony involving Alieu Jobe, Yaya Jobe, Modou Lamin Kebbeh and Mamadi Conteh.

Drammeh told the court that she lives at Tallinding, and she belongs to the same association called disaster risk reduction with the accused persons.

She stated among other things that the 1st accused said he had received a call late in the night, but he did not know who the caller was, and she went to the 1st accused and PW1 called in her present and it was put in loudspeaker and she could hear the voice.

She adduced that PW1 informed the then police PRO, Inspector Mballow, about what was going on, adding that the then PRO told the complainant to tell the accused to come and collect money from where he was.

“Upon the arrival of the 1st accused he was arrested and others were later arrested, and they were sent to the major crime unit, and later brought to court,” she stated. 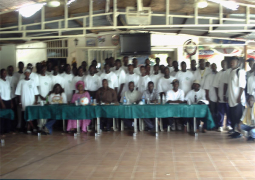