A man called Pa Omar Tunkara was yesterday arraigned before Magistrate Dago of the Kanifing Magistrates’ Court, charged with criminal trespass and impersonating as a public officer.

The charge sheet on count one stated that on 28 November 2012, at Kanifing Estate, in the Kanifing Municipality, the accused, Pa Omar Tunkara, entered into the premises of Charles Fowlish Senior Secondary School, with intent to annoy, intimidate and insult one Ramatoulie Manneh.

Count two stated that Tunkara falsely presented himself to the Principal of the said school as a soldier in the rank of a Colonel working at State House, which representation he knew to be false.

He denied the charge and was granted court bail of D100, 000 with two Gambian sureties who must swear to an affidavit of means and deposit ID cards. 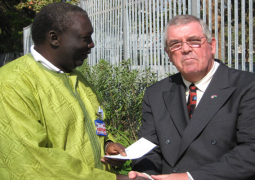