Bridget Musa, a woman and a Cameroonian national, was yesterday arraigned at the Brikama Magistrates' Court on a charge of human trafficking.

According to the charge sheet that accompanied her to the court, Ms. Musa on 26th January 2010, at Lamin village Kombo North in Western Region received the sum of US$1000 from four persons namely, Amadou Hydra, Alagie Fofana, Omar Dampha and Nata Mass for the purpose of transporting them across the national borders.

Ms. Musa has, however, denied the charge when she appeared before Magistrate Emanuel Amadi.

She was granted a court bail in the sum of D300, 000 with three Gambians sureties, despite the objections of the prosecution.

Superintendent Yaya Touray, the prosecuting police officer, told the court that the accused must not be granted bail considering the following:

That the offence with which the accused was charged is punishable by up to life imprisonment; that the accused is not a Gambian, and if granted bail she might abscond from the jurisdiction.

The case was adjourned to 9th February 2010 for hearing. 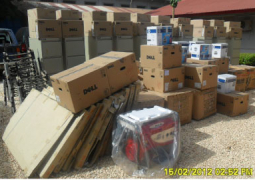