The case of Lamin Jabang, Bakary Manneh and Abdousalam Jallow was on Thursday adjourned to 30 April as the consequence of the absence of the prosecution from court.

The trio was earlier charged with two counts of housebreaking and stealing but their case was on Thursday, last delayed when the Brikama Magistrates' Court was informed that the prosecution officer was not in court.

Meanwhile, Lamin Jabang, one of the three charged, had pleaded guilty to the charges and will subsequently know his fate.

In another news, magistrate John Njie is, on 30 April 2008, expected to proceed with the case of one Hadim Njie. Hadim was charged with stealing a bicycle and chicken; charges he denies. 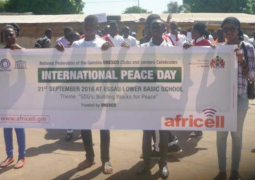