As part of its efforts to support poor and needy communities Gambia Red Cross Society in partnership with Icelandic Red Cross distributed food items, seeds and fertilizers to 562 communities in the North Bank and Lower River Regions of Lower Baddibou and Jarra East respectively.

The move, which saw over 40, 000 people benefit, is part of the Red Cross Food Security Operation (FSO) 2012 campaign.

The initiative, which started last week, will last for four months.

The agency distributed rice, oil, rice seeds and fertilizer coupons to the beneficiaries.

Speaking at the start of the distribution at Kerewan, North Bank Region, Madam Birna Halldorsdottir, Operation Manager of the Icelandic Red Cross said her body has been very supportive to the Gambia government and the Gambia Red Cross society for the past year.

She said since the government of the Gambia declared food crisis in the country, her body decided to help Gambian farmers with rice seed, fertilizer, and rice and oil.

Birna explained that since they conducted the identification of the beneficiaries, they were put under categories after which it was decided that every family will receive rice seeds and fertilizer, but only the most vulnerable families will receive rice and oil.

She said they divided the communities into three categories, category one are the most vulnerable families, while two and three are better, but indicated that some in category two will have rice and oil together with the other beneficiaries.

“When people fall victims of certain circumstances, others do the advocacy for them that is the value system we found ourselves in,” Lamin Queen Jammeh, Governor of the North Bank Region said.

“When seeds and fertilizer are given, it is an empty bag, which is expected to work on the seed and fertilizer in other to produce for the future; it will certainly impact on performance that is why we will appeal for the decision to be revisited,” he added.

He commended the donors for responding to the plight of the Gambian people through the government and the National Disaster Management Agency (NDMA).

Noting that everybody in the Gambia is affected by the crop failure, Darboe said the degree of the problems defers and that is why they categorise their intervention areas.

On women gardeners, Darboe said the Gambia Red Cross want to  support over 9000 women and 30 women groups to expand their gardens, give them proper fencing and also provide them with wells.

He said this distribution of these items will support families with food ration for four months, but any sooner they have funding more families will be added to category three.

For his part, Mr Lamin Darboe, Governor of the Lower River Region lauded the gesture, noting that the Gambia is a third world country and always need help. He said last year’s crop failure affected every individual in the Gambia and that is why people need help to address the problem.

“In the Gambia, the nature of disaster is very much elaborate in the sense that housing is a problem, because people are poor; they build very poor houses and whenever it rains, their houses do collapse,” he explained.

“When we have drought people are affected in all corners and when there is poor harvest is more serious,” he stated.

According to him, the nature of disasters is very serious and not in one way. “It is multi-dimensional and that is why we need more support from donors like you (Red Cross),” he said.

He commended the Gambia Red Cross for their intervention and support to the farmers at all times, while calling on other donors to emulate them.

He also lauded the National Disaster Management Agency for their hard work in responding to disasters at all times and taking care of the victims.

Responding to the gesture, Pa Panneh a beneficiary from Lower Baddibou commended the Gambia Red Cross and its partners for coming to their aid.

“I am very pleased with the Red Cross because the gesture came at a time when we are really in need of assistance,” Panneh stated.

Another beneficiary, Momodou Keita of Samba Musu village also in Lower Baddibou district also lauded the gesture, noting that it came at a time when they needed it most.

“Food is a very important component for any human being without which we cannot work,” he said. 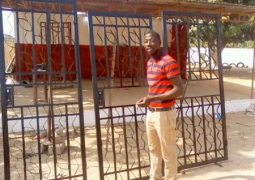