The Assembly of Gambia Muslim Youth (AGAMY) recently distributed more than hundred computers to various institutions, such as health centres, schools, and youth groups, at a ceremony held at the Supreme Islamic Council headquarters in Kanifing through the assistance of its partner association in the United States of America.

Dodou Jah, president of the organization, said they have given out the computers through the assistance of their partner association in the US.

He said the computers they gave out were tested and were in good condition, which the recipients would make good use of.  Omar A. Bojang, PRO of AGAMY, said the organization, formed in 2009, is registered with the AG Chambers and NYC as a charitable organization.  He said they aim at bringing youths together, particularly Muslim youths, to mobilize resources and exchange ideas towards the socio-economic development of the country.

“Our task is not only to bring people to God but also to extend a helping hand to our fellow human beings,” he said, adding that they have been rendering so many services to the people.

He said the recipients of the computers are Fagi Kunda, Gunjur, Banjulinding, Serrekunda Health Centre and Farato Health Post.

He said the distribution was preceded by a fact-finding mission on all these institutions, which determined how the items were distributed to them.

The recipients’ were very happy with the good gesture and assured the donors they would put them into good use.

The event ended with Quranic recitations and prayers. 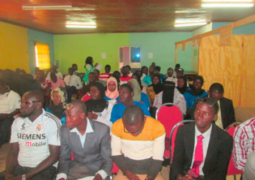 Clubs' reps react to arrest of Buba Mbye-Bojang in Brikama