Lawyer Assan Martin, a former magistrate and human rights advocate, has reiterated his call for African governments, NGOs and civil society in general to do more in the promotion and protection of human rights in the continent.

"African governments must honour their obligations in promoting and protecting human rights within their own countries, and the continent as a whole," Martin said in an interview with our reporter ahead of the 48th ordinary session of the African Commission currently under way in .

According to Lawyer Martin, the only way out for the African continent in the 21st century is for its governments to have more respect for human rights and the rule of law. This, he added, is fundamental for all democracies around the world.

"Without these ideals, our continent will be doom with atrocities and human rights violations beyond human imagination, just as we experienced in the 20th century," Martin observed

He added that African nations and institutions are far behind in the promotion and protection of human rights and respect for the rule of law.

In his view, Africans should do away with convening endless meetings and conferences, and start implementing the international conventions and treaties on human rights they signed, and the rule of law.

"It should be more than convening meetings and conferences. What matters most is for African nations to comply with and implement all conventions and treaties signed on human rights and rule of law," he said, adding that this is the fundamental challenge facing our continent.

He expressed the need for nations and institutions that do not comply with their obligations under such treaties or conventions to be held accountable.

"It is high time for nations and institutions that do not comply with their treaty obligations to be held accountable, and failure of which, they be penalised through sanctions or other measures," he stated.

According to lawyer Martin, the African continent had suffered and experienced a lot of human rights violations, and time has now come to put an end to these atrocities around the continent.

Human rights violations, he went on, are occurring around the continent on a daily basis, noting that citizens are losing confidence in governments and the institutions needed to protect them.

While calling on nations and civil society to work hard, and find better ways to ensure that international treaties are implemented, Martin noted that without respect for human rights and rule of law, most African states will become failed states, thus paving the way for anarchy and massive corruption.

"Therefore, successive generations of our continent will find it difficult to remedy and regulate activities for the betterment of our nations," he concluded. 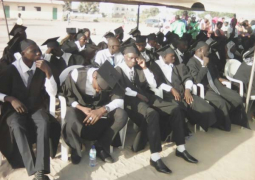