The aid will help authorities in Guinea, Liberia, Sierra Leone and Nigeria to strengthen their surveillance and response systems to halt the spread of the deadly disease, AfDB president Donald Kaberuka said.

“The Ebola epidemic is not only a public health crisis, but an economic crisis ... which affects many sectors,” he told a press conference.

West Africa’s Ebola epidemic is by far the deadliest since the virus was discovered four decades ago in what is now the Democratic Republic of Congo.

The World Health Organisation (WHO) says the death toll for the virus has reached 1,229, most of them in Liberia, Guinea and Sierra Leone, with four cases in Nigeria.

Some 2,240 people are also confirmed or suspected to have the disease.

Meanwhile, Cameroon has closed all its borders with Nigeria in a bid to halt the spread of the Ebola virus, state radio said on Tuesday.

“The government has taken the decision to protect its population because it is much better to prevent than cure the Ebola virus,” government spokesman Issa Tchiroma Bakary told Reuters.

The WHO said it was working with the UN’s World Food Programme to ensure food delivery to 1 million people living in Ebola quarantine zones cordoned off by local security forces in a border zone of Guinea, Liberia and Sierra Leone.

It has told countries affected by the outbreak to screen people departing at airports, seaports and major land border points and stop any with signs of the virus.

Several international and regional airlines have cancelled services to Liberia, Sierra Leone and Guinea as a precaution. 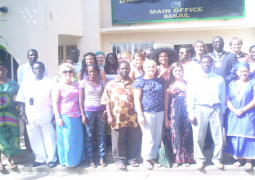