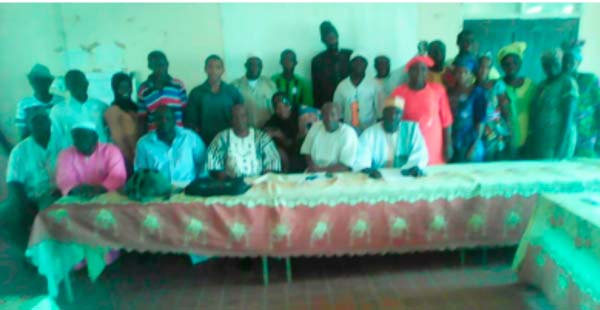 The Agency for the Development of Women and Children (ADWAC) in partnership with Local Rights Program 9 of Upper Nuimi, recently organised a two-day community interface with duty bearers and rights holders on programmes and activities implemented by NGOs and institutions in Upper Nuimi.

The programme funded by ActionAid International The Gambia, was meant to promote social accountability and accelerate human rights approach to development.

Speaking on the occasion, Mamsamba Joof, Executive Director of ADWAC, underscored the important the two agencies attach in creating a platform in which duty bearers and rights holders interact in promoting shared learning and enable them to be aware of the intervention of other development organizations and institutions in improving lives and livelihood.

He noted that the interface would bridge barriers and enhance social accountability on how the intervention contributes to transform their lives and livelihoods.

The director thanked heads of institutions and organizations for their invaluable support in promoting shared learning and creating more awareness among farmers.

For his part, Governor Ebrima KS Dampha, lauded ADWAC and ActionAid International The Gambia for the foresight, noting that the interface would contribute in empowering communities to be aware of what their development partners are doing for their livelihoods.

He described the interface as a method of enhancing and promoting human rights approach to development and making both actors and beneficiaries accountable to each other.

Paul Mendy, Regional Education Director for region 3, echoed similar sentiments and called on all stakeholders to be vigilant supportive of  each other’s efforts.

The synergy also provided a platform which institutions and NGOs used  to highlight some of the challenges that deter them from responding to the developmental needs of the rights holders.

Chief Momodou Chatty Cham of Upper Nuimi, praised ADWAC and ActionAid International for their continuous support in enhancing the  lives and livelihoods of  rural farmers.

He remarked that the intervention has contributed significantly in championing human rights approach to development, citing land rights and women representation in the decision making process.

Alh. Lamin Ceesay, chairperson of Kerewan Area Council, called on institutions and organizations to promote networking and information sharing to avoid duplication of efforts and to ensure and enhance the harnessing of grassroots consultation and involvement in the implementation of development projects.

He assured of council support and collaboration on this noble initiatives.