African Dutch Association, an international association called ADEVEKAH E.V., founded by Gambians based in Germany, on 7June 2012, donated cartons of clothes and shoes worth over D200,000 to Kanifing Municipal Council disaster victim through Lord Mayor Yankuba Colley in a ceremony held at the council’s store in Kanifing estate.

Speaking earlier, Alhagie Ndongo, chairperson of ADEVEKAH E.V., said his organization was founded by Gambians in 2009 in Germany.

He said their ultimate aim is to support people in need in health, education, agriculture among others sectors to improve their standard of living.

According to him, the association has other members but Gambians form the majority, adding that his organization has rendered support to people of other countries such as Turkey, Colombia, Somalia, Senegal and Germany.

Ndongo used the opportunity to thank ‘NET RADDA’ company for bearing air tickets for the members to travel to The Gambia, DHL service and the provision of the materials since the inception of the association in 2009.

He says plans are underway for ADEVEKAH to have a farm in Sumbundu Jarra Kabada as part of the association’s activities in The Gambia, special thanks to Sheriff Sarr, councillor of Old Jeshwang, for facilitating links between the KMC and ADEVEKAH in Germany.

In receiving the donated items, Mayor Yankuba Colley hailed ADEVEKAH and described them as true and patriotic citizens.

He said there are Gambian organizations abroad but taking the initiative of rendering such support is the first of its kind”.

He thanked ADEVEKAH for their timely intervention and assured them of his office’s support and cooperation.

For her part, Binta Sey Jadama, KMC disaster coordinator, expressed appreciation about the gesture, saying it was “timely one”.

She said January to June is the fire season for KMC and within this period this year there were 65 fire incidents recorded of which two lost their lives.

“Rainy season is prone to disaster for communities settling in the coastal shoreline areas,” she said. “This support will go a long way in relieving disaster victims.”

Sheriff Sarr, ward councillor of Old Jeshwang, commended ADEVEKAH for their support, while thanking Essa Bobb for being the mediator of the support programme.

Mr Sarr called on others to emulate ADEVEKAH for their humanitarian gesture. 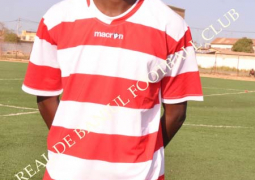