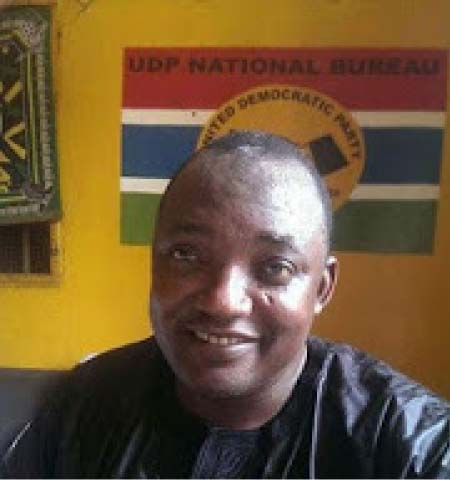 United Democratic Party (UDP), the biggest opposition party in The Gambia, has unveiled a 51-year-old businessman as its flag-bearer for the 1st December 2016 presidential elections.

UDP revealed Adama Barrow as its presidential candidate during a press briefing at the party’s secretariat in Banjul yesterday.

For the first time since its formation in 1996, UDP has a flag-bearer different from its founder and secretary general, Lawyer Ousainou Darboe, who is now beyond the 60-year age limit for presidential candidates. He has contested and lost against the incumbent in all the four presidential elections since 1996.

Lawyer Darboe is currently serving a three-year jail term for unlawful assembly and other similar charges for taking to the streets without a permit.

Dembo Bojang, national president of UDP, said three candidates applied to succeed Darboe as the flag-bearer, but Mr Barrow was elected by the overwhelming majority of the party’s central committee.

Other applicants were Abdou Darboe and Bun Jarjue.

In his acceptance speech, Mr Barrow said:  “I stand before you, before the whole nation, in humility having been honoured by my party, by the members of my party, by the entire Gambian people in selecting me to carry the flag of the United Democratic Party to victory in the forthcoming presidential elections.

“This is a great responsibility, and I am accepting it with my unquestionable belief in Allah, the Almighty, and the confidence and trust I have in the Gambian people. I know the Gambian people are yearning for change. They have done so since 1996 and I believe that the time has come for that change.

“My nomination is the first step [towards that change] and I know that with the suffering that all Gambians irrespective of age, sex, religious or tribal background, have experienced, we will bring about change in December.”

Mr Barrow, who is also the acting treasurer of the party, further called on all Gambians to be rededicated to “this noble task of salvaging” the country.

Opposition unity on the agenda

Presently, the loud cry among opposition sympathisers in The Gambia and diaspora is the need for opposition parties to unite to achieve their common objective of unseating President Yahya Jammeh in the polls, come December.

The UDP flag-bearer has also reiterated such calls, saying all Gambians, particularly leaders and members of the other sister parties, should get together to remove the incumbent government in the polls.

“In the coming days, I will be stretching my hands to other parties to come together to form a single front,” Mr Barrow said.  “It is a monumental task, but we owed it to our country, to our leaders to do it and do it the right way.”

He further added: “In the next few days, our executive and I would be contacting our colleagues in the other parties and other interested groups with a view to engaging in a dialogue that could lead to creating a conducive and feasible arrangement that would lead to the defeat of this government.”

According to official version, Mr Barrow was born in 1965, the same year as President Jammeh, in Basse. He did his primary school education at Koba Kunda Primary School, then in 1981 he proceeded to Crab Island Secondary Technical School where he sat to the Secondary School Leaving Certificate Examinations.

From Crab Island, Mr Barrow proceeded to Muslim High School from 1985 to 1988.

He is said to have spent most of his adult life in Banjul under the guardianship of the famous Alhaji Momodou Musa Njie, who introduced him to business which he does up to now.

His political career started with the formation of the UDP in 1996.  He was an ordinary, but vocal member of the party in his native constituency of Jimara in the Upper River Region (URR).

For the past three years, he has been the acting treasurer of the party.  He has extensively travelled to England and Germany.

He was the UDP’s contestant for the 2007 parliamentary election in his native Jimara consistency, but lost to Mamma Kandeh who has now formed a new political party called Gambia Democratic Congress (GDC).

Mr Barrow obtained 2,835 votes while Kandeh who was contesting for the ruling APRC party by then got 4,067 votes.

With exactly three months to the 1 December election, opposition parties are announcing the flag-bearers for the election.

Halifa Sallah has been announced as the flag-bearer of the People’s Democratic Organisation for Independence and Socialism (PDOIS), Dr Lamin Bolong Bojang for the National Convention Party (NCP), and now Mr Barrow for the UDP.