[if gte mso 9]> One Amadou Bah, accused of theft, Wednesday opened his defence before Magistrate Sarr of the Brikama Magistrates’ Court.

In his testimony, Bah told the court that he lives in Brikama Jamissa, and understood the charge and denied any wrongdoing.

He said one Hydara told him to find clients for Hydara’s cashew nuts, and went to Jimpex to find customers.

Designated as defence witness one (DW1), Bah added that the price they gave was low, and he went back to Brikama to search for customers.

Then one day, he received a call from a man called Kebbeh, who said he heard Bah has cashew nuts to sell, and asked Bah to take the cashew nuts to him.

The cashew nuts that belonged to him were 3 tonnes; and he told Kebbeh that the other cashew nuts belong to the others; that if he wanted them, he should go and talk to the owners.

Kebbeh came the next day, checked the nuts and said the cashew was good.

Kebbeh then told Bah to take all the cashew nuts to his warehouse.

The following day, he brought a truck but it could not carry all the cashew nuts.

He took some cashew nuts from Momodou Jallow, Ebrima Jallow, Kali Jallow and one Hydara, which amounted to 11 tonnes all together, Bah told the court.

He said when he took the cashew, Kebbeh gave him an advance payment and he gave D105,000 to Hydara.

The second day, he could not take the rest of the cashew nuts due to the rain.

On the third day, he collected the remaining cashew nuts, and he told someone to go with him as a witness.

They went to Sarro to weigh the cashew, but those doing the weighing were not around; and so they proceeded to Jimpex, but the scale they used there was different from the one they used in Brikama.

Bah said he then went for the scales used in Brikama, and they weighed the cashew nuts, which all together weighed 23 tonnes.

Kebbeh then gave him a cheque, but he could not go to the bank.

On the following day, before going to the bank, he went to see Kebbeh in his office and Kebbeh told him to wait until the next day because he did not have any money at the bank.

He said on the following day, they went to the Ecobank.

He was asked to wait, and he waited until the bank was about to close. When he confronted them, they told him to go back to Kebbeh so that he could tell him the truth.

He went to Kebbeh’s office, and after an intense argument, Kebbeh gave him D275,000. 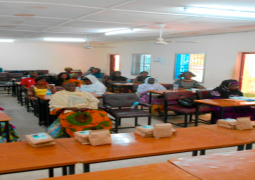