About 50% of paved roads in The Gambia funded by EU

Ms Agnès Guillaud said this is nearly 50% of the paved road network in the country.

She said the cost of financing these roads was 76.5 million euros (equivalent to around D4 billion).This is different from EU’s assistance to The Gambia in other areas.

Ms Guillaud made this statement on 30 October in Pakaliba during the inauguration of the Sofanyama Bridge along the Soma-Basse road.

The EU-financed roads include the Barra-Amdallai Road (19.9 km); the Mandina Ba-Seleti Road (12.7 km); the Trans-Gambia Highway (25 km); and the Soma-Basse road (193 km) of which the Sofanyama Bridge is an important part.

The EU has also contributed as much as 7 million euros to the Basse-Velingara road project, which is yet to be completed.

Ms Guillaud said:“All these (road financing) would not be possible without the generosity of all 28 member states of the European Union and the many hard-working European taxpayers.

“Allow me to thank them for their important contribution to the improvement of the road network in The Gambia.”

To defend against wear and tear of properties from normal usage, it is essential that all forms of maintenance are guided by a carefully formulated maintenance programme.

In view of this, the State House in Banjul recently announced that given the high cost of maintenance for government’s capital assets, the Office of the President will henceforth be the inspector general for all physical assets of the government, particularly buildings.

Ms Guillaud said: “The EU welcomes this approach and is of the opinion that more predictability for the medium-term road maintenance budget is necessary to cover a well-established maintenance programme.”

She said the EU is pleased to see that the budget allocated to the Road Fund has increased year after year, and has reached as much as D73 million in 2013.

The Road Fund is important and necessary to protect the road infrastructure, which is part of the physical assets of The Gambia.

Ms Guillaud emphasised the necessity for weighing stations for axle load control in order to limit the weight of trucks crossing The Gambia.

This is also a recommendation from ECOWAS since it is well known that a road will degrade very quickly if such control mechanisms are not being implemented.

The trunk roads Barra-Amdallai, Mandina Ba-Seleti, Trans-Gambia Highway and the Soma-Basse-Velingara will be used by an increasing number of trucks from Senegal, Guinea Bissau, Guinea Conakry, and other sister countries.

Therefore, the EU diplomat said it is of paramount importance to control this parameter to maintain the roads.

“The European Union would welcome a dialogue on how to finance these stations in the context of our 11th EDF financial envelope,” she said, pledging the continued, strong commitment of the EU to assisting the Gambian people and their government to address the challenges ahead. 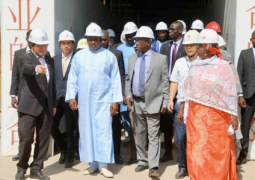