A brighter future for Africa’s farmers? The new harvest agricultural innovation in Africa

PROFESSOR Juma says that African agriculture is at the crossroad. Persistent food shortages are compounded by unwelcome climate changes. Yet development in science and technology and engineering worldwide offer Africa new tools. Efforts to promote regional markets will promote incentives for agricultural production and trade. And ‘a new generation of African leaders is helping the continent to focus on long-term economic transformation’.

This is worthy book with an official feel. It reads like being present at an expert workshop seeking positive reactions.

The author is a Kenyan, professor of the practice of International Development and Director of the science, Technology and Globalization project at Harvard University. So the tone and scope of the book are those of an extended report aimed at experts in the field, government officials, administrators and those with a professional interest in agricultural development in Africa. The emphasis is on innovation. As the author says, ‘New ideas need new champions’; and surely this kind of publication needs to be mirrored in more popular. Less academic publications, along with all sorts of media messages aimed at a much wider audience.

Juma’s first chapter reminds us that despite fast-growing urbanization Africa is still a predominantly agricultural economy, and needs introduce technological innovation and a focus on how to improve the productivity of agricultural workers, most of whom are women.

The matter is urgent: in 1990. Over 150 million Africans were hungry, and by 2010 the number had risen to 239 million. The proportion of undernourished people is rising. Sub-Saharan African agriculture is 90 percent rain-fed and highly vulnerable to weather shocks. Only four percent of Africa’s crop area is irrigated, compared with 39 percent in southern Asia. There’s little water security in many areas, and soil in many places less fertile than it used to be.

Much of rural Africa is without passable roads, so transport costs are high. Many farmers who clear land reduce the forest cover and thus unwittingly increase greenhouse emissions.

Lowest in the world in use of fertilizers

Fertilizer use in Africa is only ten percent of the world average of 100 kilograms per hectare. Just five countries (Ethiopia, Kenya, South Africa, Zimbabwe and Nigeria) account for almost two thirds of the fertilizer applied in Africa; and the cost of fertilizer in Africa is two to six times the average world price.

The writer is inspired by China’s success in modernizing and transforming its rural economy over the past 30 years. But, he says, Africa has abundant arable land and labour ‘which, with sound policies, could be translated into increased production, incomes and food security’. Yet investment has been low. In a word: ‘Sub-Saharan Africa ranks the lowest in the world in terms of yield-enhancing practices.’

Africa is faced with huge technological challenges. The continent should be able to make use of the huge aggregation of know-how that has been amassed globally in recent decades. Juma optimistically says that while Africa is lagging behind, its countries have the ability not only to catch up with industrial leader but also to attain their own level of research growth’.

Putting a premium on learning

Industrialized countries have the ability to learn how to improve performance in varied fields, including institutional development, new technology, trade and best use of natural resource. The key to success as it should be also in Africa is putting a premium on learning and improving problem solving skill. Each generation blends the new and the old and charts its development. Emerging countries need to invest strongly in infrastructure, including roads, schools, water, sanitation, clinics, telecommunications and energy.

Africa should nurture the development of small and medium sized enterprises, which requires local repair and maintenance expertise. Africa needs, too, more government supported and funded higher education institutes. Says Juma: ‘Most African countries already have in place key institutional components the emphasis should therefore be on re-aligning the existing structures and creating new ones where they do not exist.,

Within North Africa, which has experienced the highest of Africa’s agricultural growth, Egypt stands out (with 3.6 per cent year) as a technology leader, due to investment. A similar trend has been seen in 20 other African countries that have experienced average agricultural growth rates of over two percent.

The positive effect of mobile use

Turning to mobile technology, Juma reminds us that Sub-Saharan Africa has ten times as many mobile telephones as landlines.

Mobiles can replace hour s of travel with two-minute telephone calls. Family and kinship relations have always played an important role in African society, and mobiles strengthen this ‘social infrastructure’ by allowing faster communication about natural disasters, epidemics and social or political upsets. Mobiles create demand for additional employment; in Kenya, for instance, formal employment in the private transport and communications sector rose by 130 percent between 2003 and 2007.

Farmers used to lack access to information about weather and market prices; but now, mobiles and new services provide such information, helping farmers to boost their productivity.

In the internet domain, access to broadband is challenging Africa’s youth to demonstrate their creativity.

Juma emphasizes that new technologies should enable farmers to be flexible according to their capacities, situations and needs. Farmer should begin with small intitial investment, and experiment. If they achieve success early on with a small investment they are likely to devote more resources later.

Tissue culture has helped produce new rice verities and helped East Africa produce pest and disease free bananas. Since 1995 Kenyan banana production has more than doubled. Juma speaks of the controversial introduction of GM (genetically modified) crops. In South Africa, GM wheat grew by 18 percent in one year (2009), and in 2009 Burkina Faso grew 11 5,000 hectares of cotton, up from 8,500 hectares the year before. While GM crops may hugely boost crop and livestock production, a backlash against GM foods has created a political atmosphere under which tight regulations are being developed. The cost of introducing these and other international regulations could be beyond the reach of most African countries.

Juma gives examples of forward looking development in Africa. In Nigeria, for example, there are increasing links between universities and industry, notably in production of soya beans, cassava and cocoa. In Benin, there’s ‘self organizing system’ for up grading the growing of rice. But linkages between farmers, universities, schools, and training centers could be much stronger.

Perhaps Juma’s chapter 5 keys to his whole approach. What he’s calling for at all levels in agricultural development is a leap forward in human capacity’. He points out: ‘One of the most distressing facts about many African school systems is that they often focus little on teaching students to maximize that are available to them in their  own communities; rather, they tend to prioritize a set of skills that is less applicable to village life and encourages children to aspire to join the waves of young people moving to urban areas it also leads to nations passing over a chance to increase agricultural productivity, self –sufficiency and human resources among their people.’

About 36 percent of all African labour potential is used in subsistence agriculture. If that percentage of the population could have access to improving agricultural techniques they could transform agriculture into an income earning endeavour.

Juma’s prescription: schools should include agriculture as a formal subject, from early childhood to university.

In Ghana, for example, only 13 percent of university level students are women.

Moving through the need for fostering entrepreneur, the need for regional partnerships, and much else, Juma’s massage van be summed up as innovate, co-operate, learn, vitalize the people, harness all your natural and human resources..

The vital task for him and all the many others engaged in this field is to enthuse leaders and governments administrators and educationalists; and then and this is the huge challenge wake up people at village level to the exciting possibilities. It’s not unlike the church’s endeavour in the missionary field: the message is there, but how can it be proclaimed so as to yield fruit?

This book is full of acronyms (what are AMU, ICRISA, NCDC and WABNET, for example? It’s fortunate a key is provided).

Along with the acronyms is the usual enervating style of this kind of text:

Success stories in which synergies were created by combining market based and knowledge based interaction strategy that has to be holistic in nature and focus, in particular, in strengthening the inter-reactions between key public, private and civil society actors.

It doesn’t make for easy or gripping reading, does it? And what, may one ask, is a ‘new innovation’?

Who can popularize the message? 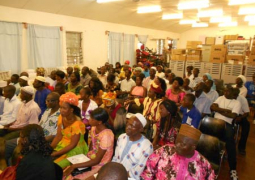