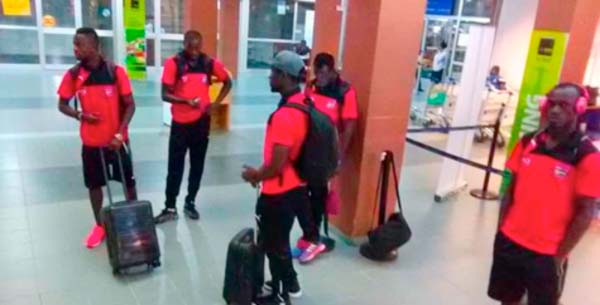 The Gambia’s Scorpions have returned to Banjul from Benin where they made an unsuccessful attempt to beat their African counterparts in their opening group D fixtures of the 2019 Africa nations cup qualifier to be hosted by Cameroon.

The seemingly inexperienced Scorpions under the tutelage of under fire coach Sang Ndong arrived home yesterday Tuesday, two days after they slumped 1-0 to The Squirrels of Benin at Mathew Kerikou National Stadium in Cotonou, on Sunday.

Benin goal came in the 52th minute through a deflected shot by Stephen Sessogne which was all they needed to beat their West African counterparts, the Scorpions who could not score from numerous chances they created.

Stephen pointed to the sky during his celebration and was joined by team mates in an exciting evening in front of the home fans.

Gambia’s best chances felt to the star men Modou Barrow and Babucar Trawally in the first half but the duo’s efforts were not good enough to earn the scorpions a happy moment.

There were no serious threats mounted by Coach Sang Ndong’s men in the second half leaving them with little or no option than to chase their shadows for the remainder of a dull encounter.

Sang and his charges on papers were the underdogs prior to the Benin encounter going by their poor records in international outings.

Statistics reveals that the Scorpions have not won a single competitive game in the international front.

However, they did little effort to prove their critics wrong after delivering yet another disappointing result.

The defeat to Benin have also placed Gambia in a difficult position going into their return leg in Banjul as well as two crunch ties against Algeria and Togo.

Togo beat Algeria with a similar scoreline late Sunday evening in the other game of group D fixtures of the qualifiers.

Togo top the group after their winning start to the qualifier campaign with an away goal advantage while Benin sit second also on 3 points after their home win.

Algeria and Gambia languished in bottom place without a single point or a goal.

The two sides are scheduled to meet in Banjul in March 2018.

And soon after watching the match on live screaming and other social networking sites, Scorpions fans have taken to Facebook to express their dissatisfactions for what they called Gambia’s poor showing in international matches.