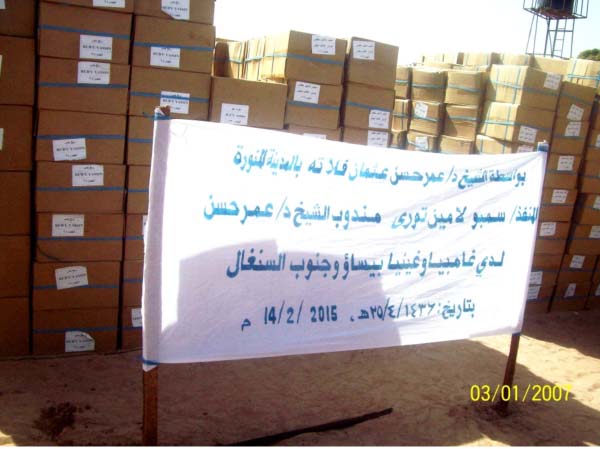 Jamaatu Salam, a charitable and non-profit organization based in The Gambia over the weekend handed over 40, 000 copies of the Holy Quran to various beneficiaries across the country and beyond.

One thousand copies were presented to the Gambia leader, as a result of the love that he has for the people by organizing quranic competition in memorization of the Holy Quran.

The presentation was held at Kafuta village in the Kombo East District of the West Coast Region, donated by a Saudi philanthropist through the Jamaatu Salam organization based in The Gambia.

Speaking at the presentation ceremony, Alhaji Sambou Lamin Touray, president of the Jamaatu Salaam, explained that this was a charitable and non-profit making organization based in The Gambia, with support from individuals and groups of people in Dubai, Qatar and Saudi Arabia.

He said these individuals and groups of people give support to the less privileged in the Muslim Ummah across the globe, in particular The Gambia, Cassamance region of Senegal and Guinea Bissau in West Africa.

According to him, since its establishment in The Gambia some years ago, the organization has rendered support to individuals and community institutions within The Gambia and the sub region of West Africa.

Part of their activities include refurbishing and building new mosques, digging wells for communities, provision of scholarships, paying dowry for the less privileged, and providing bulls for Muslim feasts, among others.

He further stated that out of the forty thousand copies of the Holy Quran, 15,000 should be distributed in The Gambia, 10,000 in the Cassamance region of Senegal and 15,000 in Guinea Bissau.

He said 15,000 copies would be distributed to the beneficiaries within The Gambia, and would include the Gambia Supreme Islamic Council, State House, AMANA, madrassas, and Islamic institutions, among others.

This time, the sponsor was an individual from Saudi Arabia who donated these materials in the name of ALLAH to seek the prayers of the Muslim Jamaat.

Alhaji Sambou Touray praised the Gambian leader in his efforts for the promotion of Islam, and thanked him in his drive while assuring him that more are admiring his efforts and are willing to support him in his endeavours.

He also commended the sponsor for this magnificence gesture.

Kata Bojang, alkalo of Kafuta village, who was full of joy and appreciation, thanked Alagie Sambou Touray for making the event a reality.

He said this was part of development and distributing this large quantity of the Holy Quran would greatly help the whole nation in the promotion of Islam.

He thanked the sponsors for this initiative, adding that this was long overdue and urged them to continue this initiative and extend it to other regions of the country.

Demba Jallow, a representative of the Supreme Islamic Council, described Sambou Touray as a trustworthy Muslim who loves this country, and that the importance attached to the Holy Quran distribution could not be over-emphasized.

He said the country needs more of this type of development that could promote the advancement of Islam.

On behalf of the president of Islamic Supreme Council, he commended both the donors in Saudi and the facilitator, Alagie Sambou Touray, for the initiative.