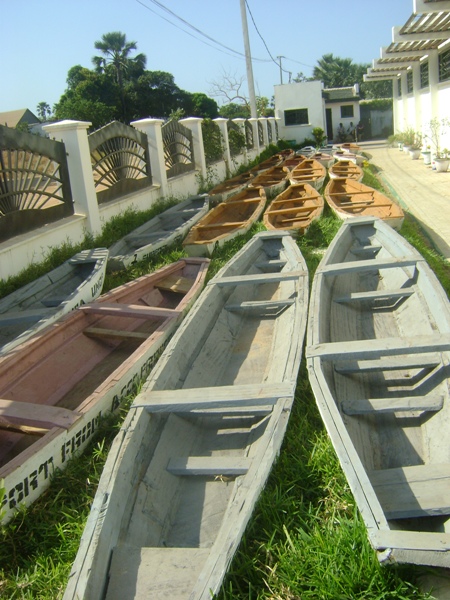 The work of members of the women oyster collectors association of Lamin Daranka village, whose livelihood basically depends on oyster production at the mangrove swamps, was recently boosted with the provision of 28 boats.

UNDP, were presented on 23 December 2010 by the National Environment Agency (NEA), at a ceremony held at the NEA head office in Kanifing.

The gesture forms part of the Adaptation to Coastal and Climate Change Project (ACCC), a project of the Gambia government, and acquired by the NEA from the Global Environment Facility.

The sub-regional project is being implemented in collaboration with the UNDP country office.

The ultimate objective of the project is to develop and pilot a range of effective coping mechanisms for reducing the impact of the climate induced coastal erosion in vulnerable regions in the five participating countries.

The activities of the project mainly related to the conservation of biological diversity and support to community livelihoods in a bid to increase the adaptive capacity of those communities to climate change.

Speaking at the handing over ceremony, on behalf of the executive director of NEA, Bully Dibba, the director of Administration and Finance, said this was a special occasion for the NEA and UNDP to hand over the 28 canoes worth D364,000.

“The government of the Gambia has appreciated the support rendered by the UNDP and other partners,” he added, and thanked the UNDP for their laudable support to the development efforts in the country.

Speaking earlier, the UNDP program specialist, Dr. Alimamay Camara, said the provision of 28 boats and gadgets through the ACCC project to the Lamin Daranka women oyster collectors association is considered by the UNDP as timely and relevant.

The UNDP is aware that the association is also active in mangrove restoration actives, he added.

“We urged the association to continue with this noble initiative, and would like to assure them of UNDP’s support within its limited resources,” he continued.

Kumba Jasseh, president of the association thanked UNDP and NEA for supporting them, and pledged that they would put the boats into good use.