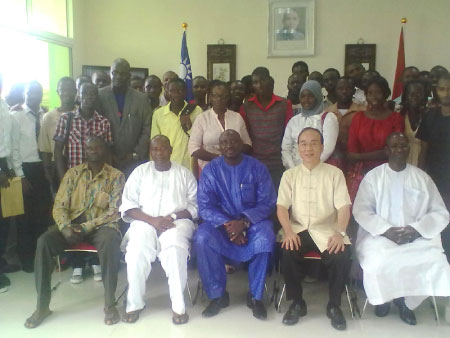 Twenty four Gambian students have graduated from the National Taipei University of Technology after successfully completing a four-year Civil Engineering Elite program in the Republic of China on Taiwan.

Meanwhile, another 25 students are set to leave the country next week for Taiwan for the Architectural Engineering elite program.

Speaking at a reception and orientation session held at the Taiwan Culture Center in Fajara, Taiwanese Ambassador to the Gambia Samuel Chen commended the graduates, and described them as very lucky after being selected by the Gambia government to be equipped for civil engineering in Taiwan.

He described the graduates as elite, and very important human resources for the country.

“Since 2006, this program started, and every year your government sends students for a special program,” said the Taiwanese ambassador, who indicated that many students are sent to study in different fields ranging from petroleum, to IT, civil engineering, and medicine, among others.

He further expressed delight for their return home, and hope they will give help to the government and services to the people, adding: “This is a good program between Taiwan and The Gambia.”

According to him, Taiwan is a country with little natural resources; however they have developed the country’s human resources.

He encouraged the ongoing students to learn the Mandarin language and know about the culture of Taiwan, while underscoring the importance of the language.

Ambassador Chen reiterated to the students to pay attention and abide by the laws and regulations while in Taiwan, further commending the Gambia government for its cooperation with the Taiwanese government on this program.

Dawda B. Fadera, permanent secretary at the Personnel Management Office, commended the government of Taiwan, noting that they have supported The Gambia in all aspects of development.

He underscored that the programs are relevant to our development.

“We cannot achieve development without capacity, and no one will come and do it for us. Thus the efforts of the government of Taiwan to support our capacity,” said Mr Fadera.

He challenged the graduates to apply the skills gained for the development of the country.

He revealed his office’s efforts in making sure that the graduates are engaged, while urging the ongoing students to go with an open mind and make best use of the opportunity.

Dr. Momodou Tangara, Minister of High Education Research Science and Technology (MHERST), also commended and thanked the Republic of China on Taiwan for the support rendered to The Gambia.

“It is of great importance and relevance to have a tailor-made program, especially in the area of engineering,” said Dr Tangara.

Minister Tangara asserted that if taken advantage of, the cooperation between Taiwan can make us achieve a lot, and Gambia can be an African lion.

He urged the students to be law-abiding, saying that of recent they have case of student misbehaving in Taiwan, and they will not allow such misconduct

He challenged the gathering to work hard to leave a legacy of prosperity.

Speaking earlier, Dr. Pap Sey, the permanent secretary, Ministry of High Education Research, Science and Technology (MOHERST), urged the graduates to play their role significantly in the development of the country.

He thanked the government of Taiwan for their critical intervention.